For the life of me I can't understand why we can't have a permanent Disc Golf course in this amazing park. Every time we have visitors in the know come to play they are blown away by this world class course. Professional Disc Golfer Douglas MacIlroy, a Senior Grand Master who has just settled here from Hawaii backed up my argument when he said after the event .. "This is the best course I've ever played."

With a lot of players already qualified for the Top 16 Match Play invites and keen to save their Disc Golf dollars for the trip to Queenstown next month it was extremely pleasing to see close to 50 players turn out for the 10th annual Auckland Championships, including 5 juniors and 8 women.

The forecast for the weekend was for fine weather Saturday but heavy rain easing to showers Sunday. Fingers crossed they're wrong about Sunday.

Saturday was as predicted, overcast but ideal for Disc Golf as players headed for their tees ready for the 10am shotgun start.

For a lot of players who regularly play on flat courses it's the elevations of Monte that either excite them or get to them. Throwing up and down hill, not to mention the fine art of landing on a steep angle avoiding the dreaded roll away takes a bit of getting used to.

As the hot pizza arrived at lunch time the cards were checked, Simon Feasey and Dean Marshall had shot the hot morning rounds of 53 with Logan Papuni, Brad Muir and Hemi Te Awhitu 1 shot back.

Conditions stayed great for the afternoon round which saw Dean, Logan, Brad and Hemi all shoot 52's with Simon coming in with a 54, dropping him to the chase card for the Sunday morning round.

Sunday morning and the radio tells me the weather is poor, heavy rain easing to showers in the afternoon. But wait ... I can't hear rain on the roof. Fingers crossed they've got it wrong.

Arriving at the park it's very overcast and dark clouds menace the Waitakere ranges to the west of us but it's not raining, even a little bit, and it stayed that way all day. How lucky were we?

The Safari 'Super 6' saw the top players take on some giant holes that impressed the big gallery who followed with interest as the order changed with every hole. Simon was on fire, the form that had deserted him earlier in the weekend was back and he was making the most of it as the gallery "oooed" and "arred" his every shot.

He closed the gap on Dean but chose to lay up his 14 metre uphill putt on the final hole (so as to take out his division) that would have seen him win the event outright. Congratulations to the 'Super 6' and thanks for the great display of top level Disc Golf.

Congratulations also to everyone who came to play this stunning course and help us celebrate 10 years of Auckland Champs. 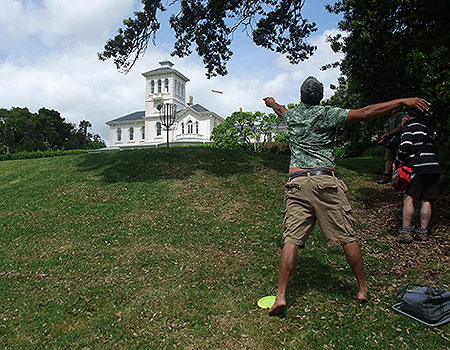 Barefoot and lovin it - Local player Conrad Hoskins could only make the Saturday but was not going to miss two rounds on baskets in Monte. 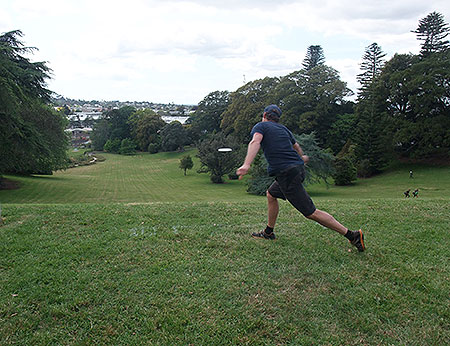 Amazen Hazen - Wanaka Disc Golfer Hazen Simson giving it his all on the 228 metre signature hole 'The Full Monte'. 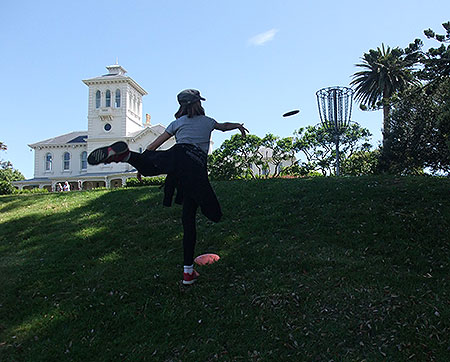 Feasey Easy - Wonder where she gets that style from? Talia Feasey putts out 9 in the Junior comp. 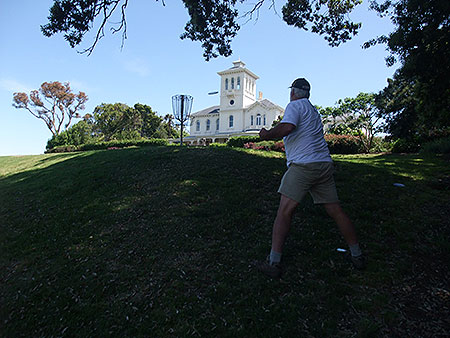 Hawaiian with Cheese - Now living north of Auckland Doug MacIlroy ex Hawaii putts out 9 in front of 'The clubrooms'. 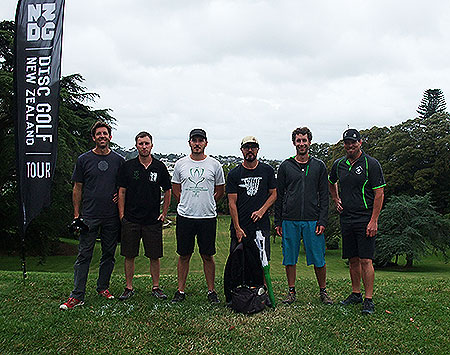 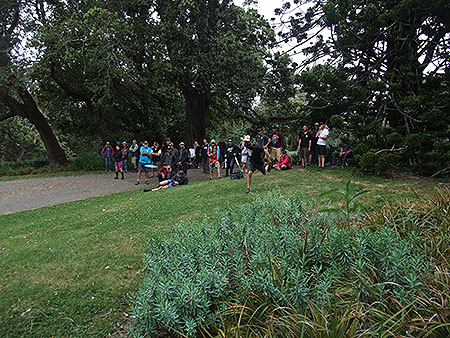 Young Unknown? - Tauranga Disc Golfer Dean Marshall shows the gallery how it's done on hole 5 of the 'Super 6'. 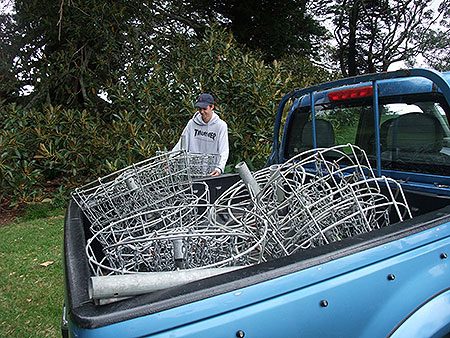 Baskets Galore - The reward for being the TD's son and a temporary course. Toby Gentil collecting baskets on the Sunday afternoon. 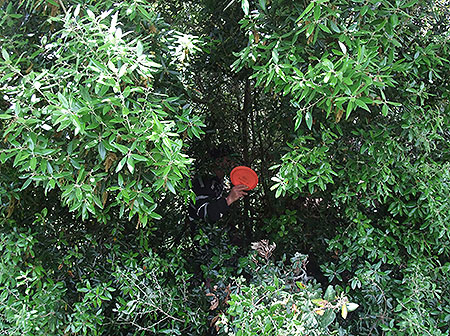 "I think I'll have to forehand this..." - Grand Master Pete Boyle finds a spot of trouble on 11. 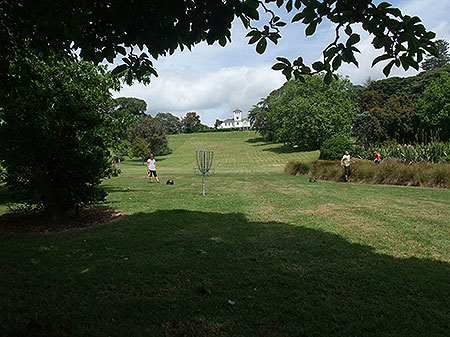 The Full Monte - From below looking back up at the Tee 228 metres away (just in front of Monte Cecilia House). 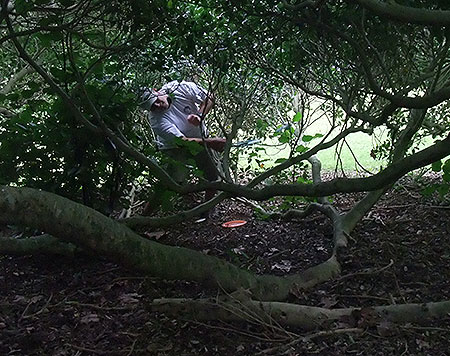 Fish out of water - Jo "Fish" Seebeck in a spot of trouble. 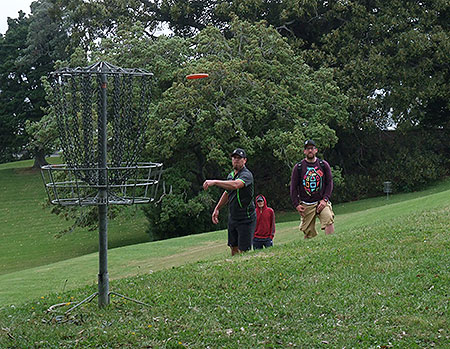 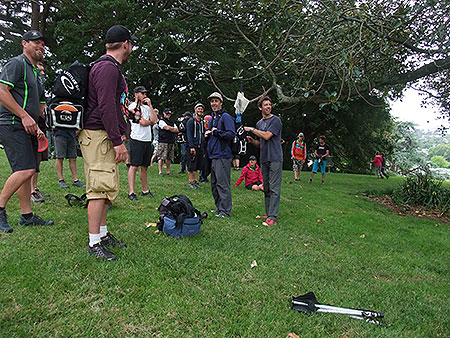 Caddies Conundrum - The reward of playing the 'Super 6', someone carries your bag. 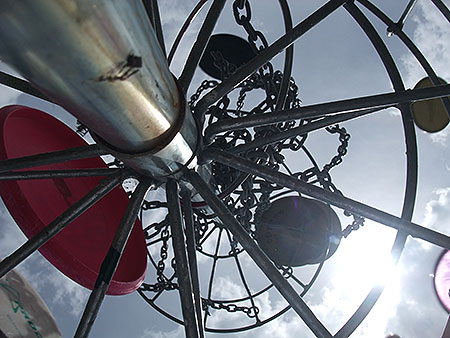 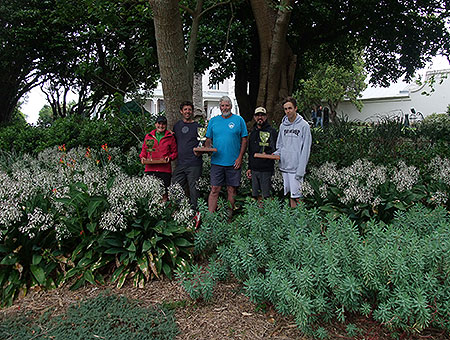 Devilish Discer - Martin de Haas enjoying being back in Monte after some major surgery. With an all-new knee but sadly still the old attitude.

Fig of Speech - Wanaka's Hazen Simson drives 18 under the protection of one of the parks giant Morton Bay Fig trees.

Canuck Chuck - Canadian Disc Golfer Forest Junker-Allan was chuffed to arrive in the country on holiday just days before the Auckland Champs.

Young Guns - The 5 Juniors who battled for the J14 Championship.

A Shore Thing - Haydz Shore from Woodhill flies his drive off Tee 4 as his playing partners look on.

Hayley-thal Accuracy - One of the 8 women contesting the competition Hayley Flintoff from Queenstown plays up to basket 9 as Ming, Alessa and Emma check out her style.

Round the Outside - Like any good Buffalo Girls, the Lost Tribe's Pete Boyle making sure he makes the mando on hole 15.

Reaching for the Chains - Twizel Champ Hazen Simson looking for two in a row on hole 1 of the 'Super 6'.

Stoney Focus - Stonemason Hemi Te Awhitu from Queenstown pulls out the power drive on hole 3 of the 'Super 6'.

Butt Clencher - Miss this and you could roll 100metres. Simon Feasey impressing the large gallery on hole 4 of the 'Super 6'.

You can twig what's going on...