Final Tournament of the Tour a Blinder

Monte Cecilia Park in Hillsborough is just a brilliant Disc Golf venue. Giant mature trees, plenty of wide open spaces, some areas you really don’t want to be in plus a good test of all of your Disc Golf skills from full power driving, hyzer and anhyzer approaches and of course plenty of short game required.

Despite the call to change the course layout for this year's Auckland champs TD Bob Gentil decided to stick with the tried and true for a couple of reasons. 1.] Players not only play each other but compete against the course so it’s kinda nice when players only play a course on the odd occasion they get to take on the same course each time and 2.] Give the locals the advantage of local knowledge! The results will prove that works!

In saying that there were a few modifications to the original Monte course: holes 6, 7, 16 and 18 had been extended and 12 has been shortened.

At the Saturday morning players meeting it was great to see 5 juniors ready to play, including 2 under 10’s. Brilliant! The juniors were ready to go along with another 28 keen Disc Golfers spread across numerous divisions.

When the cards came in after the opening round both David ‘Speedo’ Keen and Damian Peters had shown their hands, both shooting 8 under rounds of 50, the challenge had be laid down. Another highlight of the opening round was Levin’s Abraham [AB] Hartley nailing an ace on the 17th which was worth around $213.28.

Following an impressive catered lunch of hot pies, filled rolls, cakes and fruit it was back to the course for the second un-seeded round of 18, as the wind picked up a little and steady-but-light showers saw towels coming out prior to every shot. The afternoon round saw little change to the leader-board with the parks most frequent visitors maintaining their dominance.

Sunday morning and the weather was fine and warm although a little cloudy for the final full 18 holes as the players picked up their cards for the only seeded round. The top 2 groups were stacked with locals; Speedo Keene, Damian Peters and Brad Muir who all learnt the game in Monte along with the GM who designed the course, and Marty de Haas and Nigel Hailstone who have probably played Monte more than anyone this reporter knows.

In the Womens competition it was all tied up between Levin’s Gemma Sullivan and the evergreen Ming Menzies from the Bay of Plenty, and in the J15 division North Shore’s Toby Gentil [13] held a 1 shot lead over local Harrison Youngson [12] with just a couple of shots back to Waiheke Island’s Jacob Hailstone [12].

On hole 1 the GM hit a 15 metre down hill putt for birdie only to be followed by Marty de Haas not wanting to drop off the pace hitting his 11 metre up hill birdie putt. Damian Peters took a run but hit and rolled leading to a bogie so Bob extended his hold on second overall and Marty traded places with Damo for third.

‘Super 6’ hole 3 and Damian and Brad Muir birdie it with great drives, so Marty and Damo are now tied for 3rd again.

Hole 4 required a controlled straight drive down an alleyway of trees. Damian shanked his tee shot to the right and his up shot was short so Marty tried to cash in on the situation and took an aggressive run at the basket from about 14 metres away. It didn’t pay off as his shot sailed over the basket and he missed his putt back as well so third place stayed tied up albeit adding another buffer shot to the gap to the GM in second.

Hole 5 saw the Super 6 shooting right across the park, it looked long but everyone was there or thereabouts apart from Brad who was in fact under the basket to take the only 2, putting him just 1 shot off the battle for 3rd.

The final ‘Super 6’ hole was of course the signature hole of the Monte Cecilia Park course: the ‘Full Monte’, 228 metres from an elevation of about 35 metres above the basket. This hole is spectacular and the 6 still in the game didn’t disappoint. All launched impressive tee shots down the valley but none more-so than our eventual Champion David ‘Speedo’ Keene who took on the full 228 metres landing pin high and about 12 metres to the right of the basket, The crowd went wild.

All the interest was now on the battle for 3rd as Brad was just 1 shot adrift of Marty and Damo. Once again Marty went on the attack hoping to put pressure on the other two but as happened earlier it cost him with his 3rd and 4th shots missing their intended mark. His 5 on the final hole gave Damian Peters third place and saw him tied with Brad for 4th.

What a great weekend of Disc Golf! 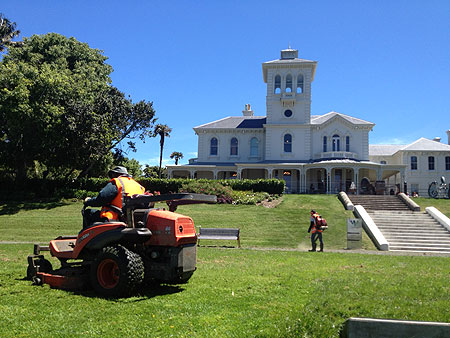 Gentil Sport believes in giving the players the best - here the tee for the majestic 10th hole is being prepared for tournament play the day before play commenced - thanks Barney!. 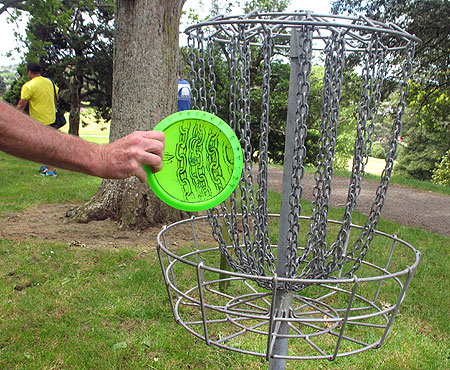 Art in the Park - Auckland City Council are proud of the arty nature of Monte Cecilia Park, one of their new 'premium' parks. Many visitors to the park over the weekend saw the disc golf baskets as quite a work of art. Not to mention Juan Unda's drives. 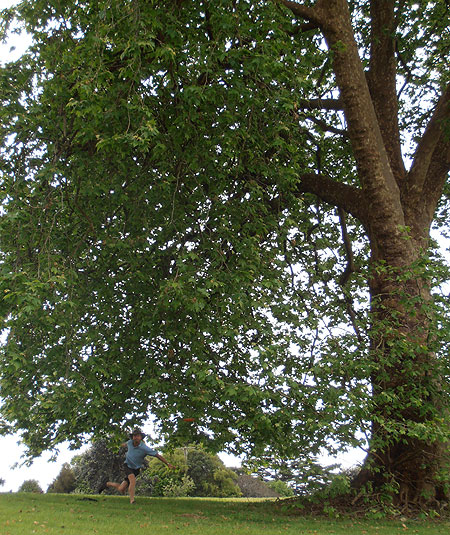 Leafing Nothing to Chance - it is not often that champion Waiheke golfer Brett Hailstone is dwarfed, but such is the case at Monte. 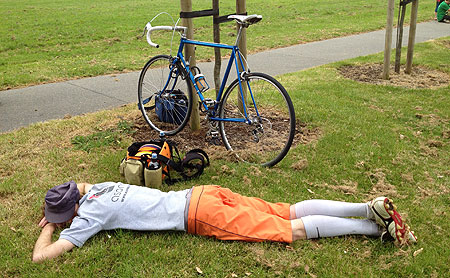 Rider - One thing about taking the green transport option is that you don't have to bother warming up. Colourful golfer Nick McKay (Auckland) uses the extra time to think about what he will wear for the afternoon's round. 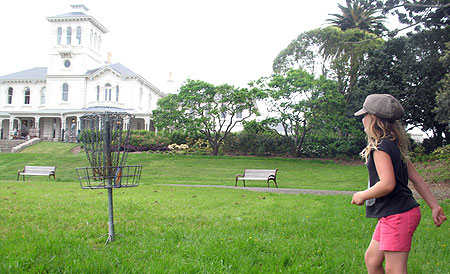 Putt for Par at Pah- with a wonderful shot right into the chains, Maia de Haas (Auckland) takes a three on hole 9 in front of the newly refurbished Pah Homestead. 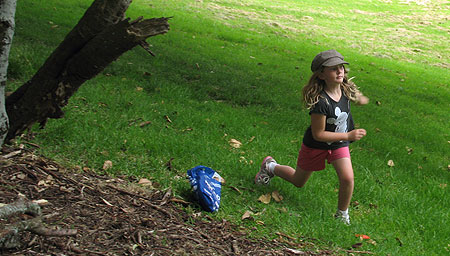 Maia Inspires - only new to disc golf but of fine heritage (her mum knows some fine disc golfers) Maia de Haas quickly got into the swing of things. 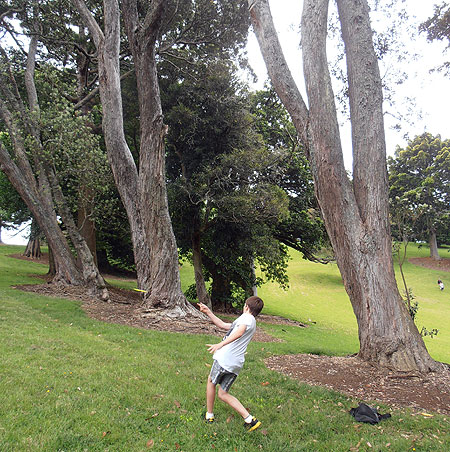 Jumpin' Juniors! - One of the fine young lads to take on the Junior Division challenge was Jacob Hailstone (Waiheke), son of Brett. Jake's sidearm was fantastic, often out driving those old fellas!.

GM - disc golf is an interesting sport in that the old fella's can always give the young bucks a run for their money. As usual the GM himself Bob Gentil was playing a steady game and finished with a great second place overall behind Speedo.

Huhu's got the Bug - still hounded for autographs after his $500 Ace at the 2011 Crater Cup, George Huhu (Auckland) continued to dazzle the gallery (he's a light technician - ed). Here he completes a third great throw for a birdie on the massive 200m 7th.

It's Like It's His Back Yard - oh, it is. Only a few metres from home, Harrison Youngson (Monte Cecilia) showed superb local knowledge with this fine putt for birdie on the tricky 5th. 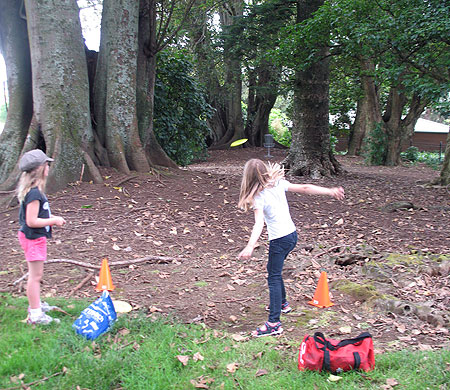 Dinner for Two - the girls discuss who they would take to the Maple Room if they get a Hole in One on the 15th and take out the prize of dinner for two. 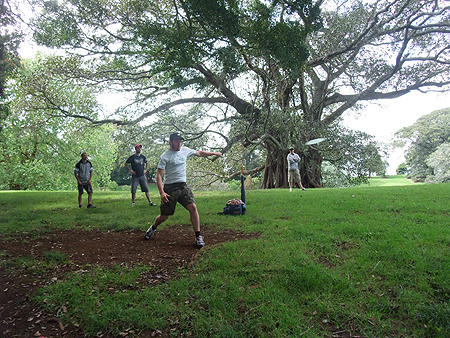 Rad Brad -Brad Muir (Auckland), another of the locals who learnt the game in Monte Cecilia play solidly all weekend. 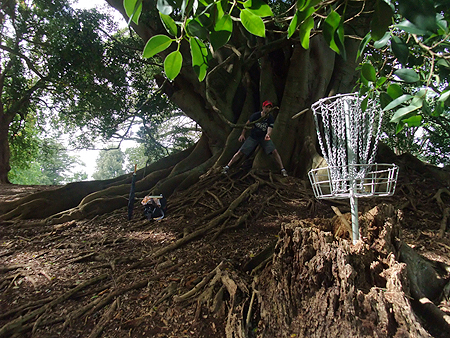 Rooted -Roots everywhere you looked. Not too different to David Keene’s job in the bar. A rare bogie from the eventual Auckland Champ. 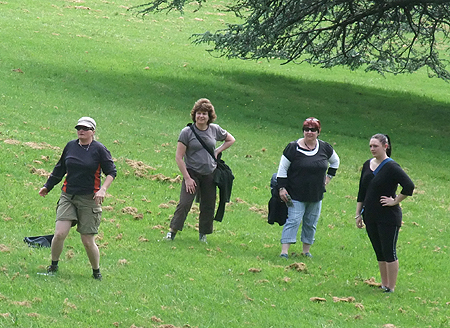 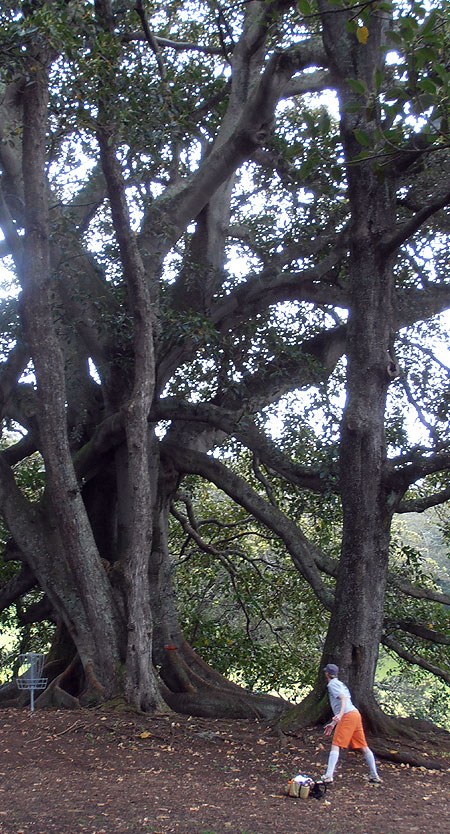 Tall Timber -and a big tree too. Walking fashion statement Nick McKay (Auckland) stands tall as he attempts a birdie on the lengthy uphill 16th. 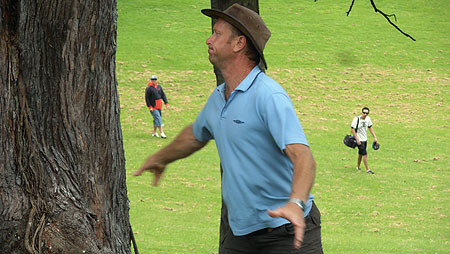 Moving Gallery - One aspect of a good course is being able to take in the play of other groups as you play your round. The Monte Cecilia Park Disc Golf Course attains that aspect well. 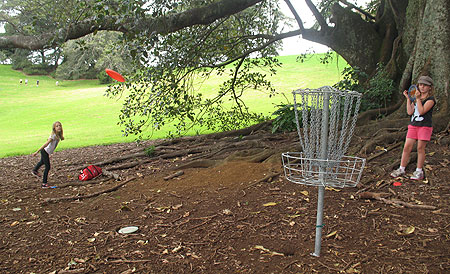 Fly My Pretty - Hole 8 and Talia Feasey (Auckland) floats one at the chains. 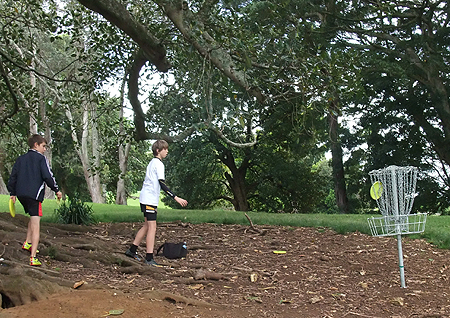 Junior Skills -Leading the Junior Competition by just 1 shot going into the final round Toby Gentil (Birkenhead) slots his putt on #8 as local Harrison Youngson looks on. 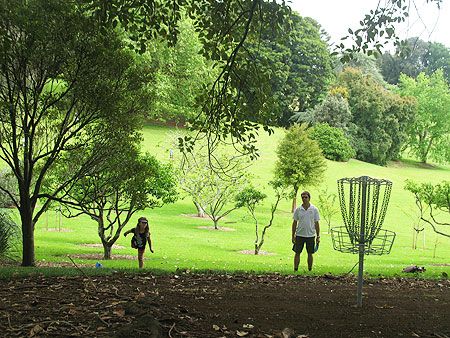 Showing the Best - Champion disc golfer Simon Feasey gets some pointers from up and coming athlete Maia de Haas (Auckland).

Damo on the Gamo -Oratia Disc Golfer Damian Peters played solidly all weekend and took home the ‘Most Fun’ title. 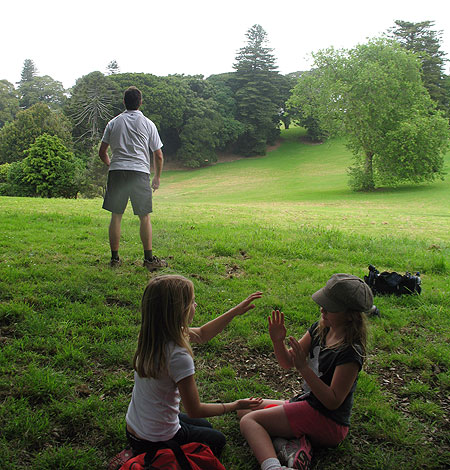 Multitasking - Simon Feasey - a boy - concentrates on his massive drive on hole 7. Daughter Talia and Maia de Haas however are girls and hence can multitask, playing pit pat poe and disc golf at the same time!.

Tall Timber Too - Another angle of Nick McKay's putt on the 16th.

See you next time!