powered by Innova, the disc choice of champions

You have to to feel for TDs or for that matter everyone involved in putting an event together and having everything that can be controlled totally sorted .. only to be let down by the one thing that is totally out of anyone's control; The weather!

It was a classic 'bit of everything' weather weekend, but to this reporters surprise .. only the fat tyre boys seemed to not like it.
I've never heard a more impressive list of ailments to keep our so called hardy MTB crew dry and warm.

Joking aside I was impressed with the big field of stayers from as far away as Queenstown, Wellington, National Park, the Bay of Plenty and of course the Auckland crew who all decided 'stuff the weather, we're here to play so let's get on with it!'

There were 4 very high calibre women players, 3 fastly improving J15 players and an impressive array of top Disc Golfers all out to have their names engraved on the impressive Auckland Trophies.

Auckland up and comer Brad Muir had gratiously offered to take on the job of setting up the course on the Friday so as the out-of-towners arrived and the locals finished work the baskets were in place for a practice round or two. Nice work Brad.

Saturday morning and there is a little break in the weather, just to give us a false sense of security, the crowds are roiling in and by 9 the car park is full and even the grass warm up area is filling up with cars. Seems Monte Cecilia School had arranged to have their school fair on the same day. Hope the GM gets some rate relief from that one as he'd been billed by the 'Super City' for the privilege of using the park and knew nothing of the 100 plus cars that were now parking dangerously close to Pin number 1.  The practice basket by now had disappeared between rows of cars. If it wasn't for Chris Kingsnorth's smart thinking of erecting a rope barrier across the end of the field who knows how many holes would have been taken out by parked cars?! Thanks for the heads up ACC. Yeah right!

Round One was played in reasonably fine weather but the stiff breeze from the North-West was out to add a shot or two to most players rounds.

As hot pizza was downed at lunch the scores were checked and the seeded second round groups were put together with the usual suspects featuring on the top card. Simon Feasey had 3 shots over the defending champ David 'Speedo' Keene, then just 1 back to Damian Peters and Brad Muir who's becoming a regular top group member, and good to watch.

In the Women's competition Tauranga's Ming Menzies had a 4 shot buffer over Queenstown's Lisa Te Awhitu and in the Juniors division Toby Gentil had a 3 shot lead over Harrison Youngson and Jake Hailstone tied for second.

The Saturday afternoon round was probably played in the worst conditions. Heavy squalls came through the park as the wind swung a little further to the North affecting pretty much every hole on the course. It sorted the chaff from the wheat though with some horrible stories of seven's and ten's coming off the course.

Sunday morning and it's looking way better than the condies for rounds 1 & 2. The sun had actually poked its head through the clouds and the wind had gone back to the standard South-West making the course way more pleasant to play - just a few decent showers towards the end of the round. Oh and the occasional 40 knot gust off the Manukau Harbour just to make life interesting.

Not that it affected the top group too much with Simon shooting a 51 [7 under]. David Keene a 53 with Damian and Brad were not too far behind though.

Brett Hailstone from Waiheke Island playing Grand Masters and Queenstown's Elliot Menzies topped the second group to make their way into the afternoon's 'Super 6' final. It was great to have pretty much everybody follow the 'Super 6' around the safari holes applauding shot after shot as the top players impressed the gallery.

Congratulations to everyone who came along and to our winners: Simon Feasey Open, Ming Menzies Womens, Chris Kingsnorth Masters, Brett Hailstone Grand Masters and Toby Gentil Juniors - we salute you and your great play in testing conditions.

A picture of concentration! NZDG's most improved golfer for 2012 Brad Muir

14 year old Toby Gentil blew the gallery away with a close to 180 metre tee shot on the Full Monte which he went on to score an sublime birdie three - this from the Pro Tee!

Jake Hailstone from Waiheke Island, Toby Gentil from Birkenhead and local Harrison Youngson spent after a great battle for the Junior Championship 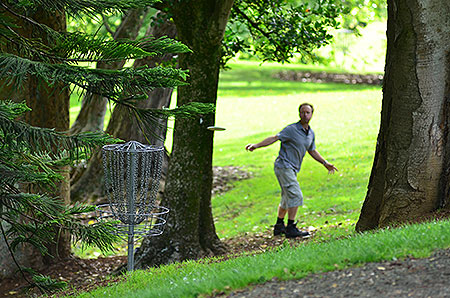 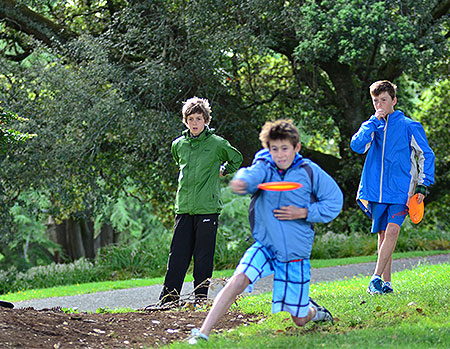 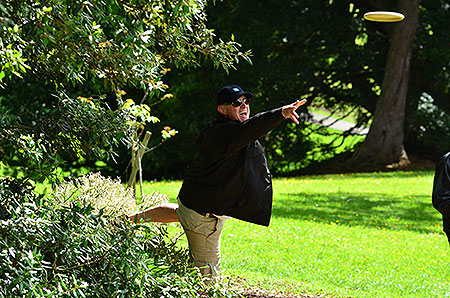 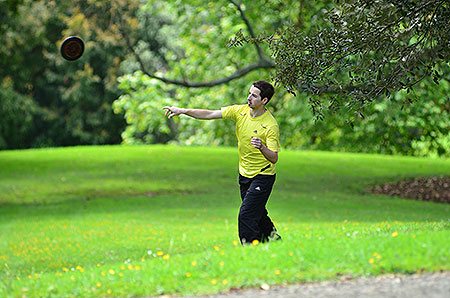 Laying up in the wind saw some very inventive golf 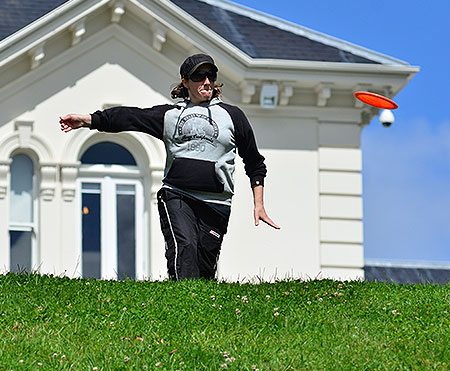 Jenny Joynt, pleased to play the Sunday morning round without the wet weather gear from Saturday 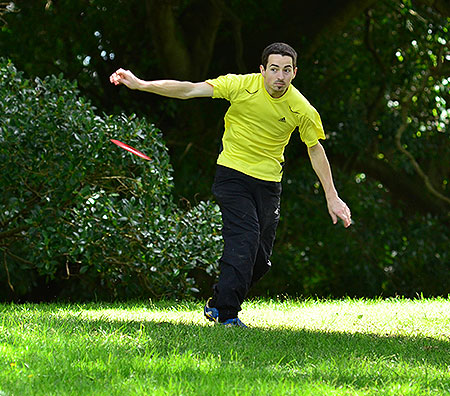 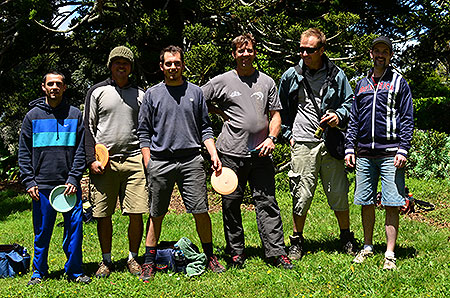 Sunday .. and the sun comes out to warm the waiting gallery and players ahead of the Safari  'Super 6' 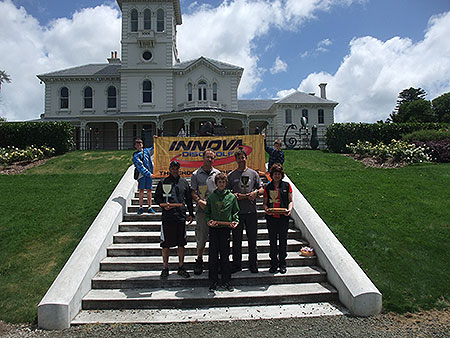 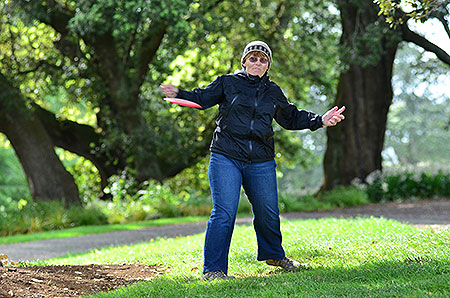 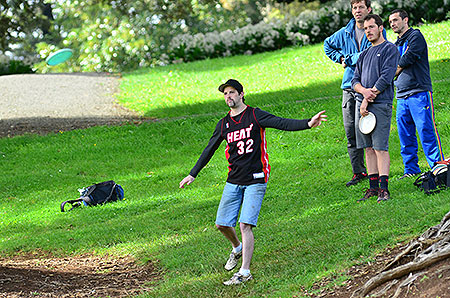 Sunday mornings top group. David Keene on the tee as Simon, Brad and Damian check out his shot 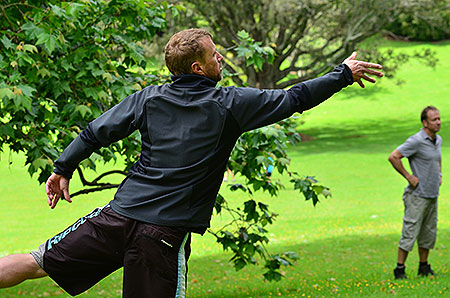 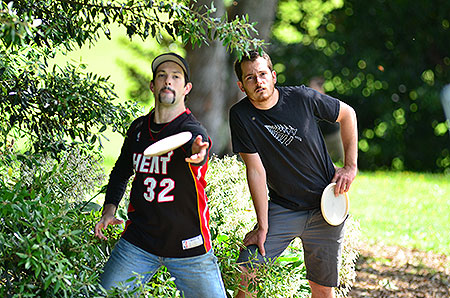 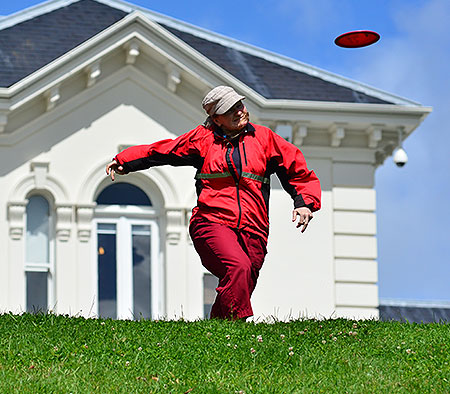 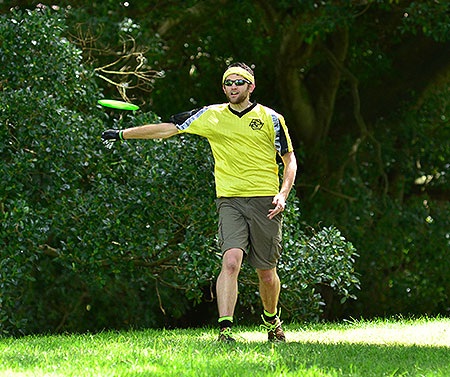 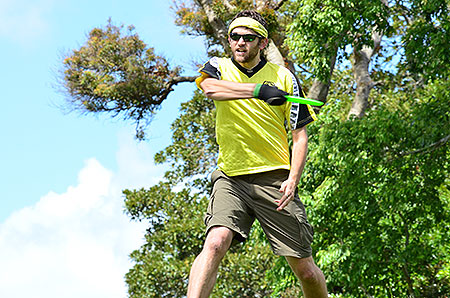 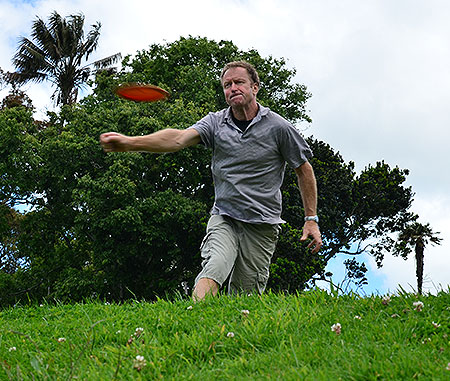