2015 marked 20 years since the Queenstown Gardens disc golf course became the first permanently established one in New Zealand and the inaugural Queenstown Classic disc golf tournament was held there. Twenty years! This momentous occasion clearly required celebrating and in fine style. It was therefore going to be a very special weekend and needed to be fun and memorable. How to? The Queenstown team hatched a cunning plot and then thickened it.

Central to the scheme was the idea to include a third day, at Paradise, and create a brand-new and exciting, fully basketed course, at the spectacular far end of the property. This area included parts of the Arcadia Station featured in the recent Hobbit movies, with a beautiful section of gigantic beech trees standing amidst lush green grass. Adventurous golfers had checked out this area over the previous couple of years, so the bones of a course were fleshed out to create a beautiful, challenging, and very varied course; the Hobbit Holes!

The other main idea was to arrange a special celebratory party for the middle/extra night of our time at Paradise. The New Zealand Disc Golf Jungle of Fame was a fun concept that had been developing over several years, so it was decided to have a full fancy dress Jungle of Fame party. Hannah Husky Joynt, resident jungle artist, created new artworks for all the recently joined members, and combined all the animals into a circular design, suitable for a disc, T shirt and poster. Martin Meerkat Galley arranged all the music and quality sound and lighting systems. Koru Discs (Simon Falcon Feasey and Woody) generously agreed to sponsor the Hobbit Holes tournament, which helped defray the budget for the party.

What else could we add in to make the weekend more memorable? What about a hole-in-one competition at the end of the Classic? Yes! AJ Hackett provided us with the excellent prize of a Nevis Swing and so the broad outline of the weekend was complete.

All that was left was to organise it! The ever inefficient Queenstown Disc Golf Club members systematically pulled all the remaining threads together. Lisa Takahe Te Awhitu designed a beautiful multicolour basket image for the poster and anniversary T-shirt. Eran Blumenthal swiftly gathered together a cornucopia of prizes. Both Paradise courses were marked out in a single workathon day. Publicity was better than ever, including a photo of James Jaguar Smithells putting on a Hobbit Holes basket, on the front cover of the Mountain Scene. Hey, who’s sorting the weather? 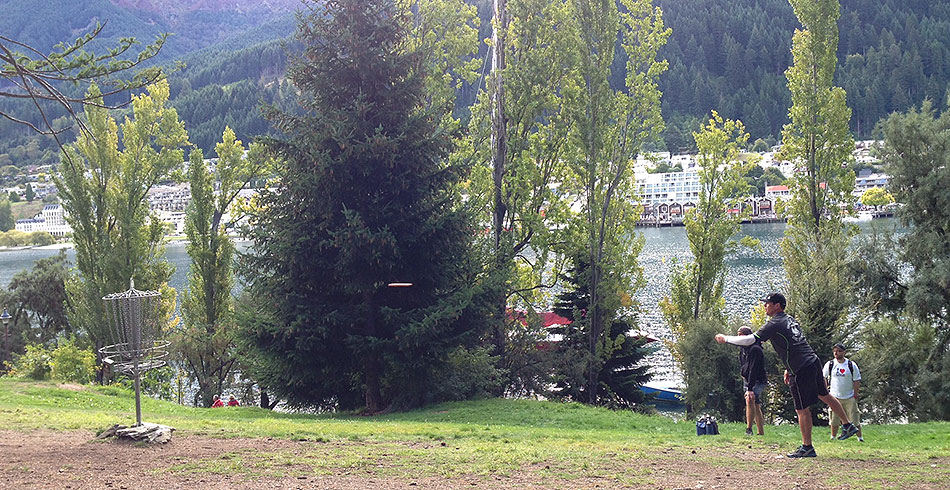 Heavy rain was predicted for Saturday in the Gardens, but the weather gods and goddesses smiled on us and it passed before the players’ meeting. A large crowd of 54 turned up to the 20th The Helicopter Line Queenstown Classic, with preregistration having worked very well. Several players from earlier years made a special effort to attend. James briefly outlined the history of the course, noting its role in the development of disc golf both in New Zealand and internationally, and observing the remarkable statistic that an estimated 500,000 to 1 million people had played on it. He also complimented the current team, whom he declared were the best ever.

And so play began. Occasional light drizzle in the morning was followed by clearing skies in the afternoon. Perhaps reflecting the weather conditions, scoring was generally a touch gloomy in the first round, but improved in the second. At the lunch break, Brad Buffalo Muir had stampeded to the front of the large Open field with a fine 44, with five chasers on 47 or 48. The men’s Masters division was tightly packed, with the top four players all being within one stroke of each other. At the end of play, Hemi Tuatara Te Awhitu had clawed back four strokes, with an excellent 44, to be tied with Brad on 92 (both scores being tournament records) and the large crowd distributed themselves to watch the safari play-off. Hemi uncharacteristically missed a putt within his range, and Brad then sunk his closer putt to seal the victory. Chris Crow Dickson just headed off Mo Moa Doerken to take out the men’s Masters division with a solid 97. Chris Dingo Davies achieved the same score to decimate the opposition in the Grandmasters division. Jaguar James won yet another victory against himself in the Senior Grandmasters with a 105. Lisa showed her class in winning the Women’s Open division with a creditable 112. Robyn Robin Agnew demonstrated her notably improved skills by taking out the Women’s Masters with a fine 111. Ben Wiel-Lake beat himself in the Juniors with a 107. And so to the hole-in-one competition, across the Gardens lily pond, which proved an exciting event for all. Brady Kiwi Kuech was the only player to nail it, to great applause. The trophies and an excellent selection of prizes were then duly distributed. There was a special surprise for the Jaguar, who was presented with the NZFDA Contribution to Disc Golf trophy by El Presidente, Nigel Honey Badger Hailstone.

And so to beautiful Paradise, where on Sunday morning lovely weather greeted the record almost 50 strong contingent to contest the 17th Dart River Jet Safaris Paradise Plates Doubles. Starting only 45 minutes late, the work in progress that is Paradise time was initially better than in 2014. However the closely bunched field slowly started separating, resulting in a stretched out lunch break. Mo and Simon threatened the course record to produce an excellent 39. Kyle Martin and Hayley Flintoff captured the mixed doubles with a 48. Roobie Tigger Ward and Penny Panther Jackson were in a league of their own with a 53.

With the weather remaining sunny, we headed out again for the Singles. Paradise time continued to exert its warping influence. During this round there occurred the most spectacular sequence of disc golf throws that I, and everyone else present, have ever seen. Adam or Evil, Hole 9, features an elevated tee, an immediate narrow slot between dense manuka bushes, with a fork in a matagouri tree 90m below as the target. I commented that I’d always wanted to ace it, but that in 18 years of tournaments nobody had ever done so. Chris McLean, Christchurch, promptly stepped up to the mark and threw the perfect drive to ace it! We descended to finish the hole and then waited to spot for the next group. Simon’s drive was like a falcon stooping on a wood pigeon; fast, straight as a laser, and right through the fork! Celebration above and below. Ben Wiel-Lake then threw. Mo then flicked one of his famous sidearms…directly through the middle of the target! Jubilation, astonishment, amazement and delight hardly begin to describe what it was like to witness three aces in four throws on this challenging hole.

Falcon Fease returned a top 41 to capture the Open title. Mo equalled this score to place him well clear of the Masters field. Chris Davies edged out the Grandmasters field with a 49. James battled strongly against himself to claw out a 53. Lisa took out her second Women’s title of the weekend with a 55. Roobie claimed the Women’s Masters title with a 60. Ben continued to struggle against himself and produced a creditable 49.

After the prize giving people retired to their huts and then returned with food for a communal dinner and their animal costumes. Much wood was gathered, the fire was lit and the stage was set for the Jungle of Fame party. Delicious food began appearing, drinks were drunk, music started, the fire grew and people slowly transmogrified into wild creatures. Once darkness fell the many and varied lighting systems were turned on, with the giant eucalyptus glowing centre stage. A slide show of years of great disc golf photos was projected onto the marquee roof. Growls, hisses, barks, squawks and other strange animal sounds were heard, as people talked around the ever larger fire or danced. The party was certainly happening! In the middle of this was the traditional ceremony, with already named animals introducing themselves and new animals announcing themselves. In the wee small hours Paul Child entertained on the guitar, and, when the lone Jaguar poured the last container of water onto the steaming coals, light was starting to appear in the sky. 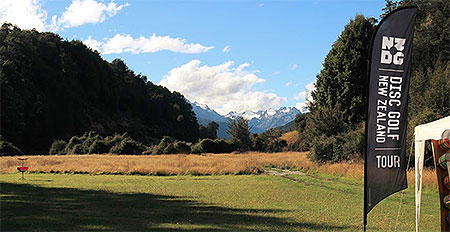 Happily Monday dawned bright and warm and soon the large contingent was trekking to terra hobbitus incognito for the inaugural Koru Discs Hobbit Holes tournament. A sequential start, which in hindsight prolonged the round considerably (Hobbit time proving even more distorted than Paradise time), provided good entertainment. Soon the groups were spread out around the spectacular course, with the early players avoiding the strong wind which developed and turned Holes 3 and 4 into considerable challenges. Through the green grassed beech trees, up onto a grassy knoll, out across a gigantic gully to a spur overlooking the Dart Valley and Southern Alps, down to the banks of the Dart, up the kowhai clad gully, back into the beech trees, up to a lofty tee site towering over a vegetated Gollum’s Gully, onto more grassy knolls including one across the Dead Marshes, and then out into the open for long drives. Hole 18 involved a trek to an elevated tee, with the target being a basket in the Plunge Pool of Eden below. An ever growing gallery watched spectacular drives for hours until the last group finally appeared and threw. Thoroughly enjoyable, very beautiful and certainly challenging was the verdict.

Three play-offs were then required, and an intriguing rule situation needed clarifying. The Jaguar, in consultation with other TDs, produced a solution fitting of Solomon, which only needed Gandalf’s magic wand to seal it. So when the dust finally settled, Simon, who shared the inaugural course record of 47 with Hemi, took the Open title after a play-off. Eran, who together with Mo got 55s in the Masters, produced a remarkable comeback in the play-off to take the division. Although Chris Davies and Nigel were tied on 54 for the Grandmasters, Chris’s decision to relinquish the title (following the rule dilemma) was a popular one. The jaded Jaguar limped home with a 68 and Ben etched out a 62. Lisa took out the Women’s trifecta with a 62, while Robin the Robin achieved an awesome 52 in the Women’s Masters, which was the fourth best round of the day! Tolkien figurines were presented as trophies.

About half the players remained for a third night, happily relaxed around another excellent fire. Tuesday saw everything dismantled and Paradise returned to its pristine state, and so came to an end an extra special and simply wonderful weekend of disc golf and associated celebrations. 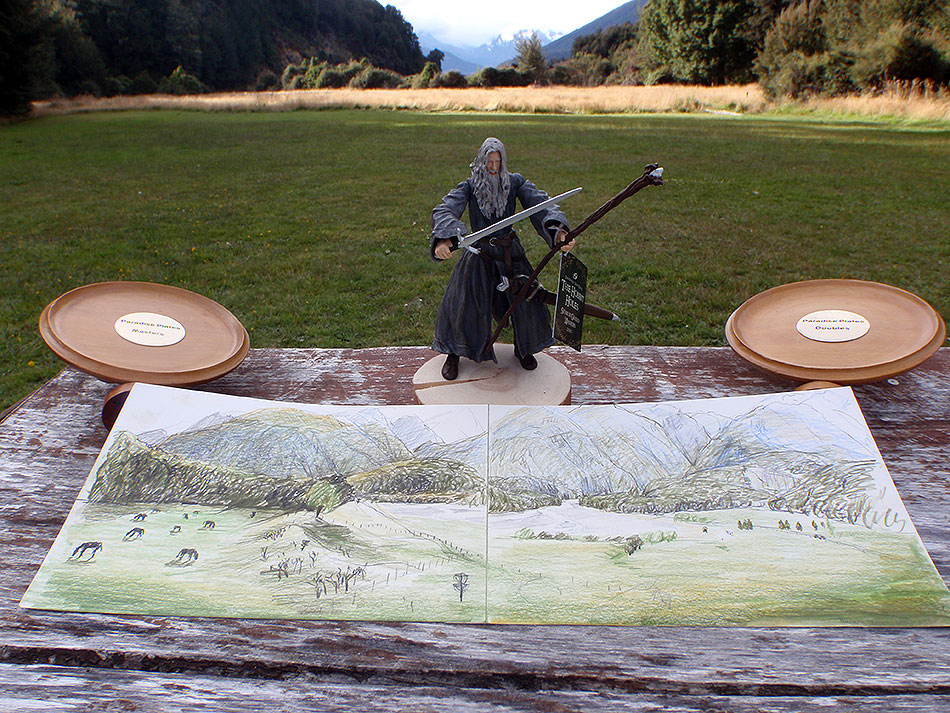 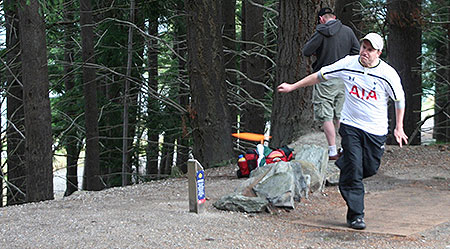 Release - Russ King gives it everything on Norwester 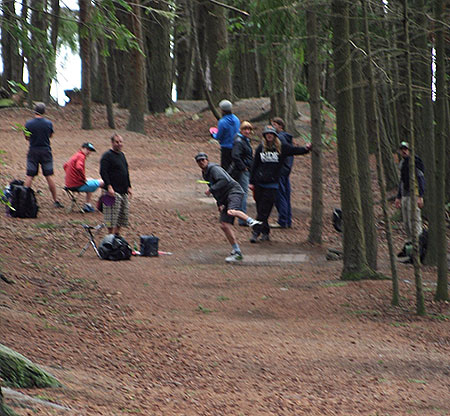 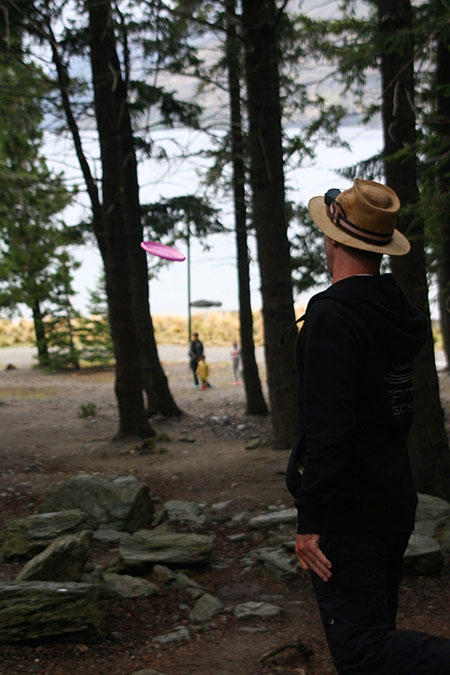 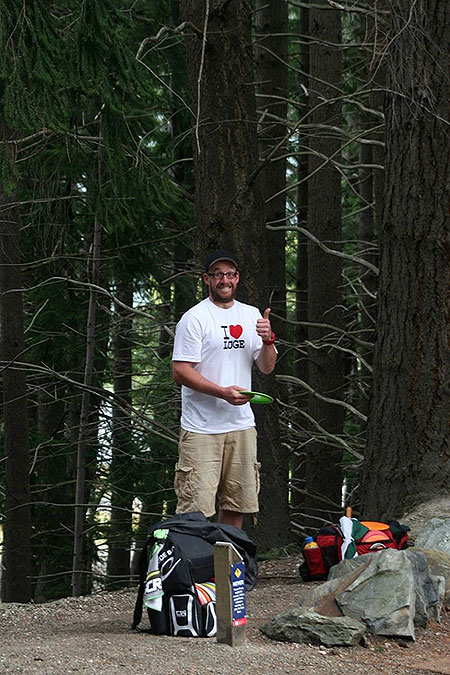 Thumbs Up - Would you say that was a grizzly smile? 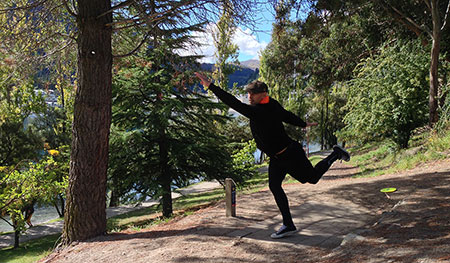 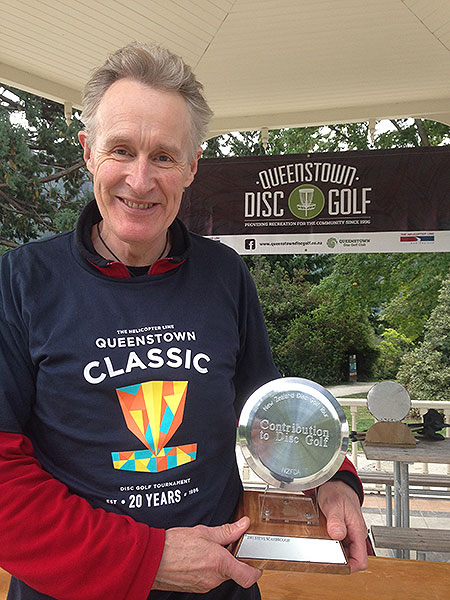 I Cannot Beliewe It! - Mo Doerken is still not completely convinced 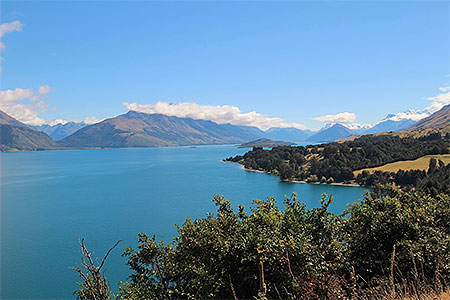 Tingling - the journey to Paradise alone is a memorable experience 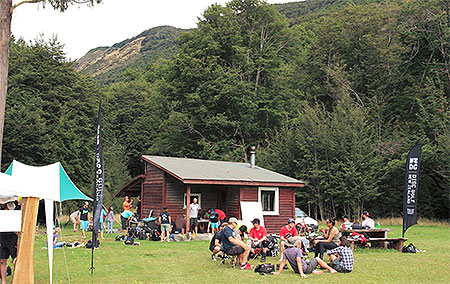 HQ - players gathered at the traditional headquarter with a view... 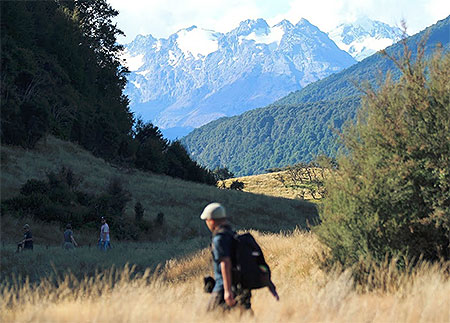 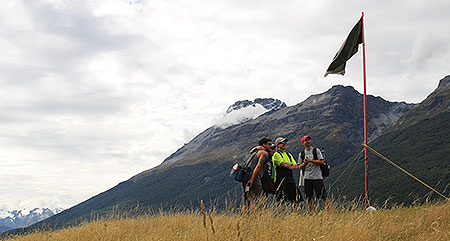 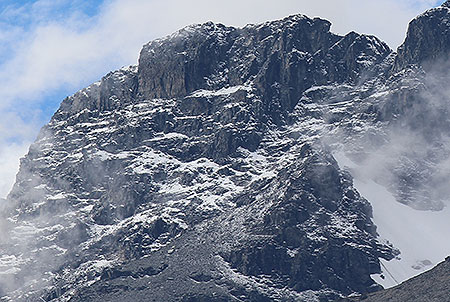 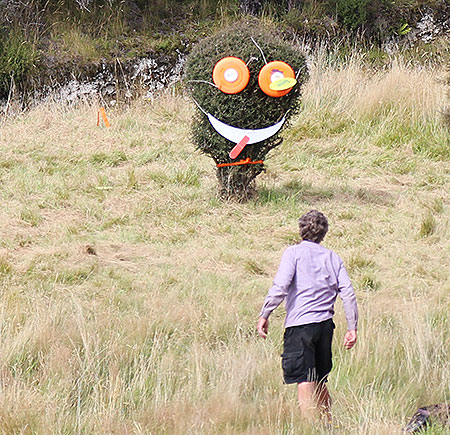 Like looking in a mirror - Chris putts [hole name] 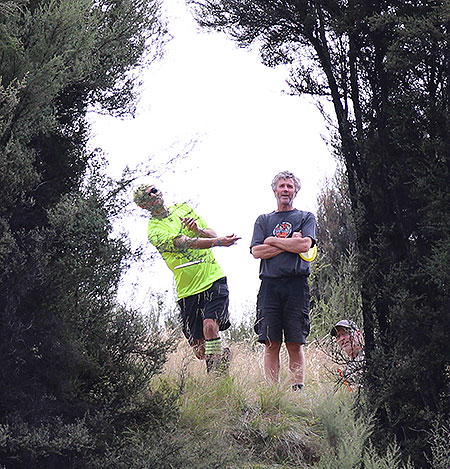 Thank you Thor - [unknown] is happy 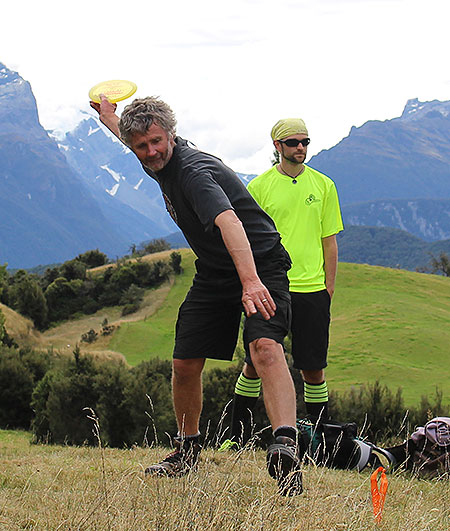 Lining up - The power and accuracy of Chris' forehand throw endures 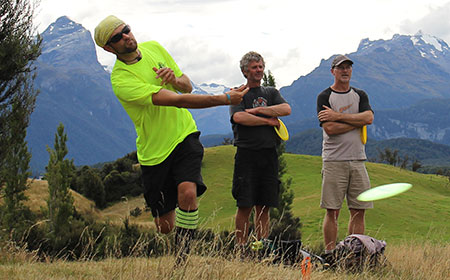 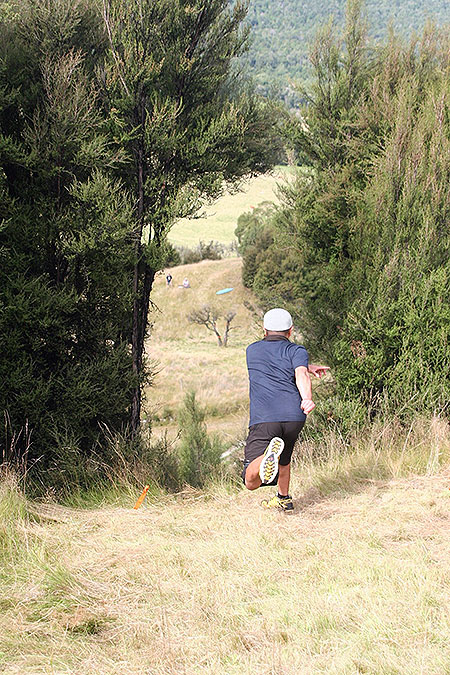 Here it comes...Akira unleashes on Adam or Evil 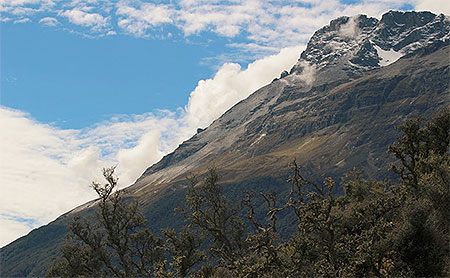 Gigantic - this is rock

"and well done to..." - in a wonderfully relaxed manner, the tournament rolled on smoother than a jaquar's coat. 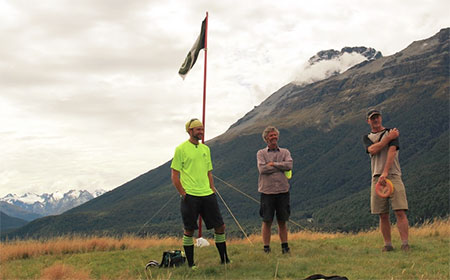 Atop - Brady, Chris and Juan are in no hurry when there are views like this

Twist and Shout - [unknown] is all follow-through trying to hit The Face.

The Falcon Sees All - Simon, the field and approximately 65 trillion galaxies

Beware the Dead Marshes - Hole 14 on the Hobbit course 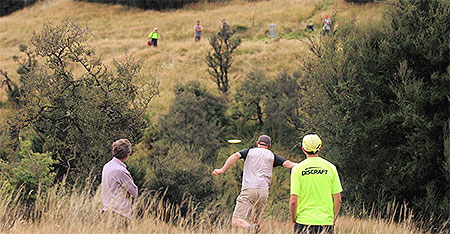 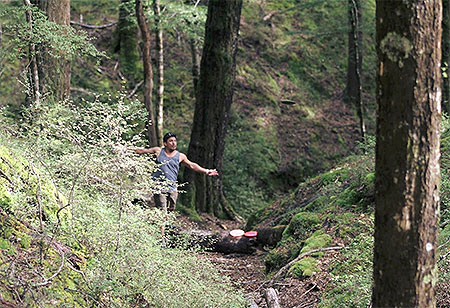 In a land of moss and lichen... - Dave attempts to 'chip out' on the tough {hole name] 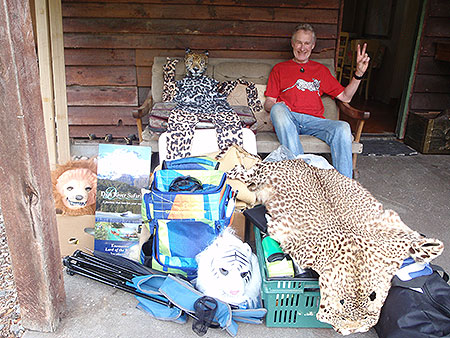 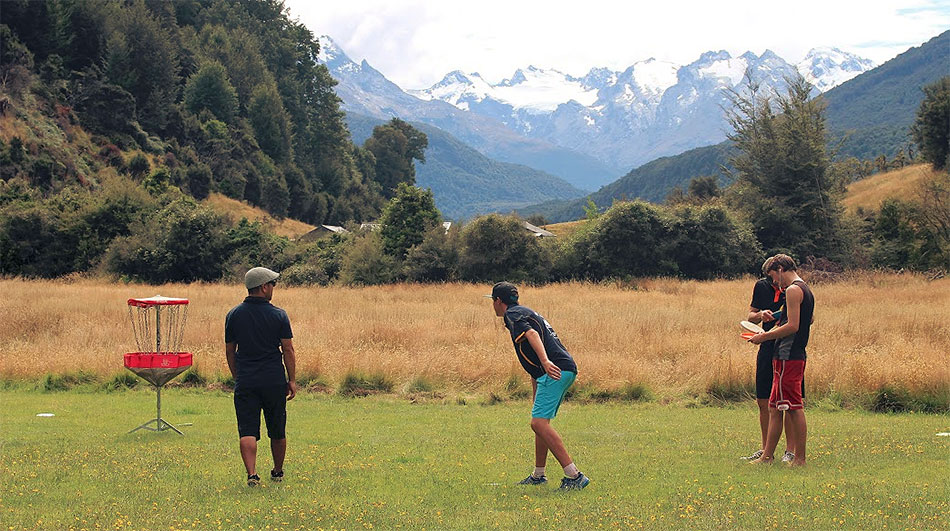 Young and Old - Ben and the Southern Alps 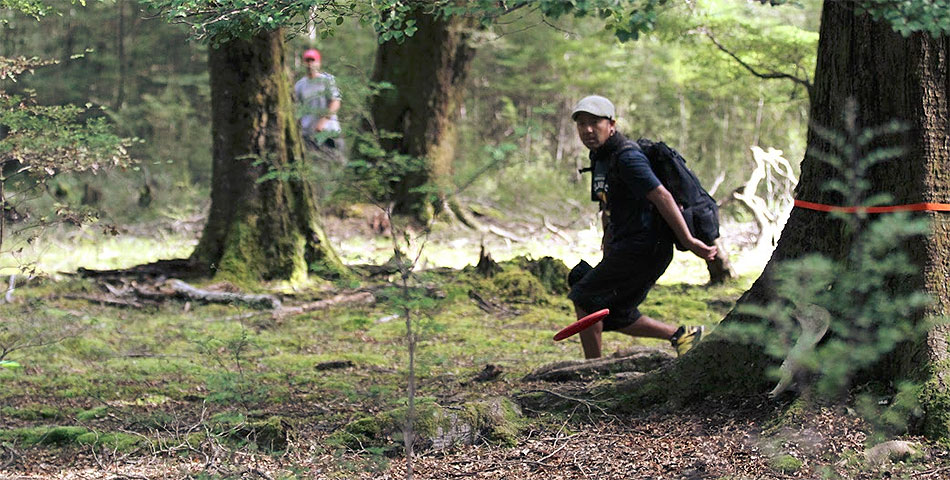 The Trek - [unknown] was on a Trek. A Trek of adventure through forests of light and forests of dark... 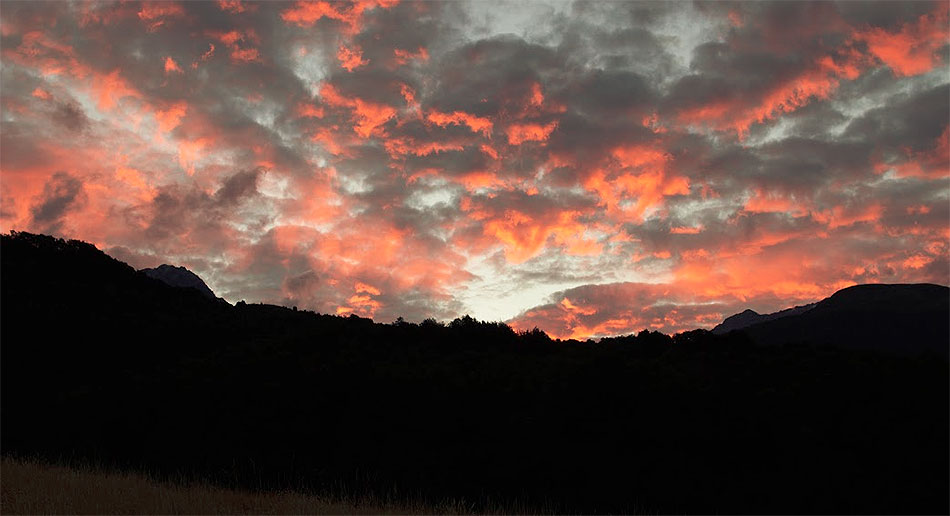 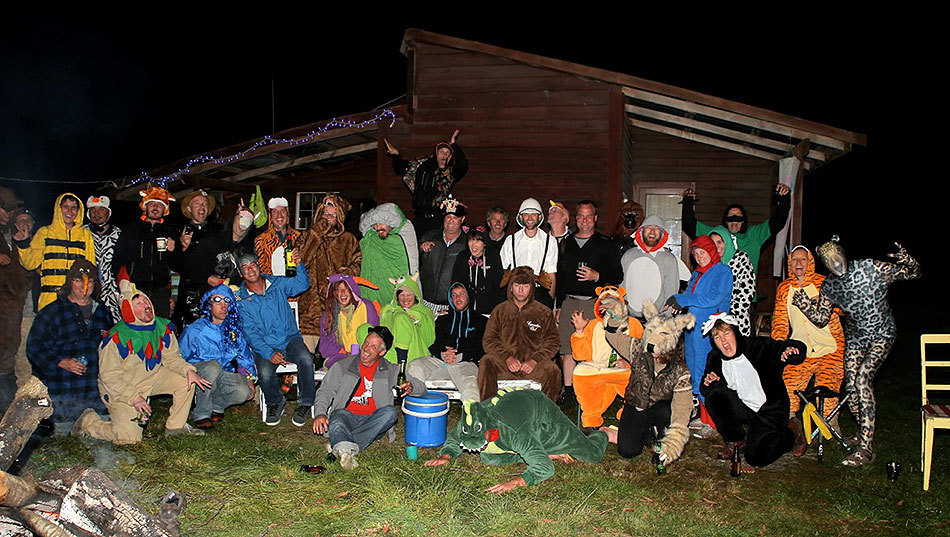 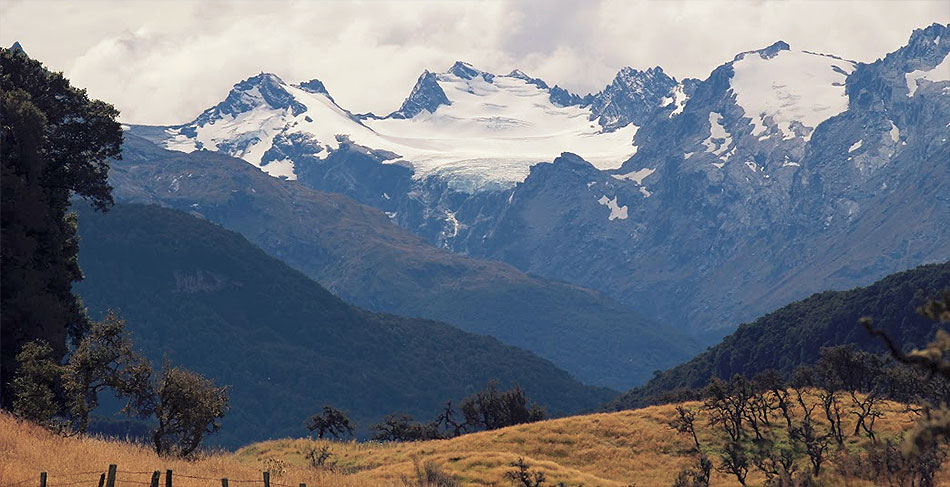 Glacial Curves - the sheer size of the landscape was wondrous