You know our sport's growing when you look around the faces at the first day's players meeting and there are numerous you've never seen before, and all of them smiling and keen to get out into the park to take on the course.

The Spa Park Course is one of this reporter's favourites, there's a good mix of tight controlled holes and wide open full powered fairways and all of this on a beautifully groomed park that's easy to negotiate. Plus ... being in the centre of the North Island it's a great place to get to from North and South.

As the baskets went out on the Friday afternoon in the pouring rain it was looking like it might be a bit of a testing wet Disc Golfing weekend, but come Saturday morning the sun was out and the renowned Taupo volcanic pumice under foot meant the course dried out pretty fast and was even fine for footwear without sprigs.

The random draw for the first round saw players of all abilities heading out to their 10am starting holes eager to get their weekend under way with a decent score. When the cards were checked over lunch Simon Feasey 's 50  was the top round [in fact for the weekend] but it was Junior Toby Gentil 's 54 that had everyone talking. Toby's game has reached a new level and if he keeps improving at the rate he is he'll be standing on the top level of the dais as an Open winner in no time.

After birthday boy [40] Andrew Taylor rightfully took out the lunchtime putting competition it was back to the course in seeded groups for round 2 of the 2015 Taupo Classic. Toby slotted in well with the top group carding a creditable 3 over 59 but it was Jackson Sullivan from the Levin Brotherhood who set the afternoon pace coming in with a 52. The NZ DG yard stick Simon Feasey maintained his lead with a solid 54 along with the Lost Tribes Blair Joines and  new North Shore resident Logan Papuni who would all make up the top group for Sunday mornings round.

The 9:30 Sunday morning start of shooting from the rifle range across the river was the cue for the start of round 3, the final full round for everyone ahead of the Super 6 which would be a little different from previous years. The GM had decided that a true safari 6 holes was what was needed this year and it didn't disappoint. With a tie for 6th over all the Super 6 was increased to a 'Super 7' over the 6 holes. It was great to see most players keen to follow the action around the park to see check out the lines the top players would take on some of the monster drives.

It was great to watch final year junior Toby Gentil playing with the big boys, he's young and hasn't been burnt too many times so he goes for everything, it paid off as well with him moving from tied for 6th to 4th after the extra holes.

Well done to everyone who made the trip to Taupo this year especially those who set personal bests on the course and of course to those who won their divisions. Simon Feasey Open, Blair Joines Masters, Gemma Sullivan Women's, Pete Boyle GM's, Jenny Joynt GM Women's and Toby Gentil Juniors.

Also thanks so much to everyone who brought baskets to the event as it wouldn't happen without you and a big up to Simon and RPM Discs for the loan of his ute for the weekend. 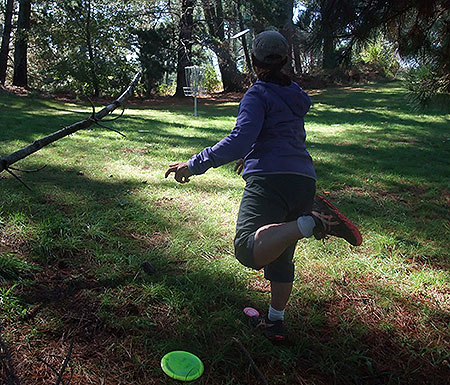 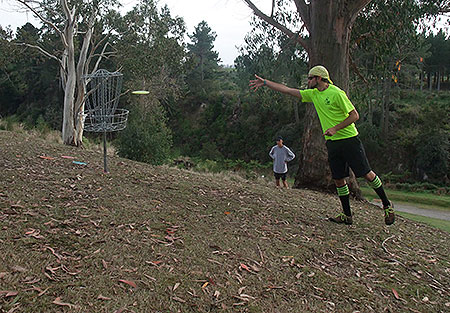 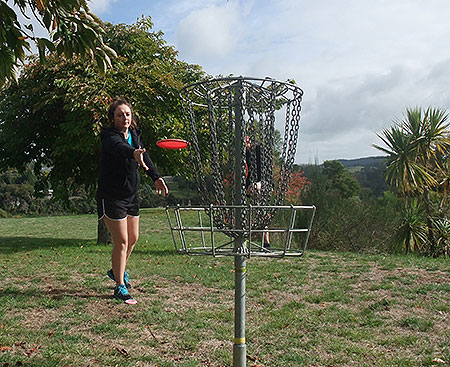 Our Own Ko - Gemma Sullivan [Levin Brotherhood] raises the bar in the woman's competition with every event she plays. 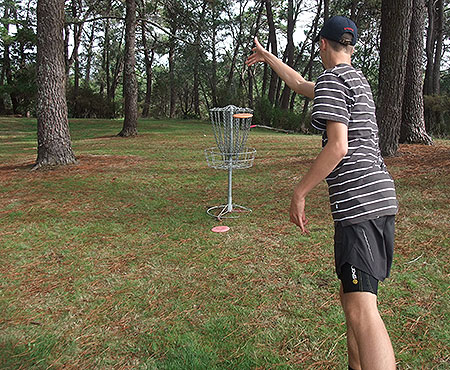 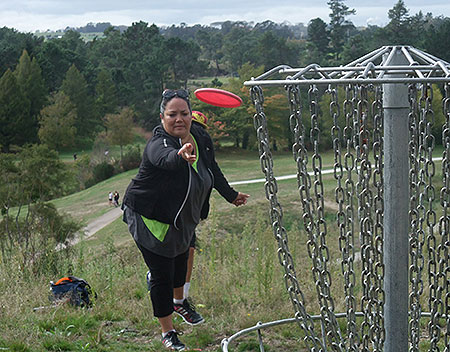 Welcome Aboard - Liz Moka [Wellington] has taken to Disc Golf like the proverbial duck to water. 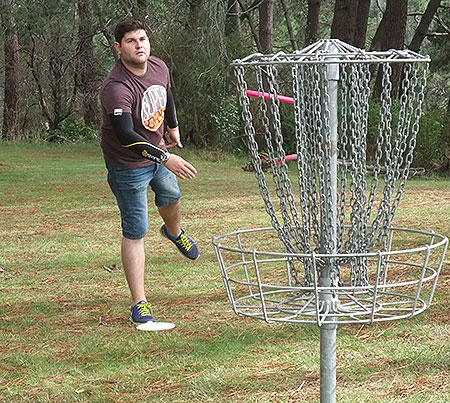 Up and Adam - Adam Rawson from Wellington slots his putt on 13. 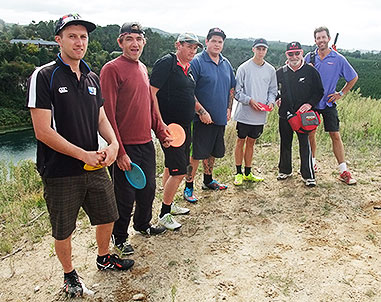 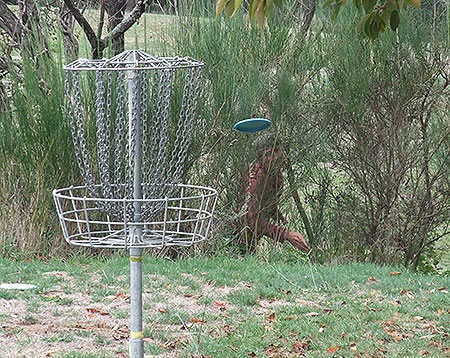 Pushing Through - Siep Van Vliet just managing to get his arm out to make his shot. 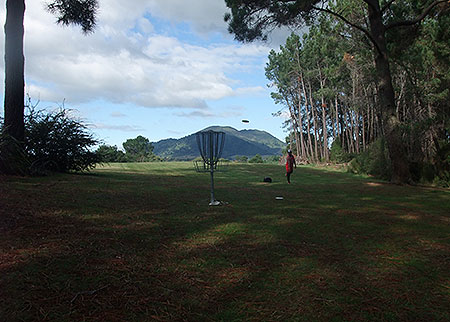 Welcome Aboard - Wellington Disc Golfer Jack Moka playing Spa Park for the first time was a pleasure to play with. 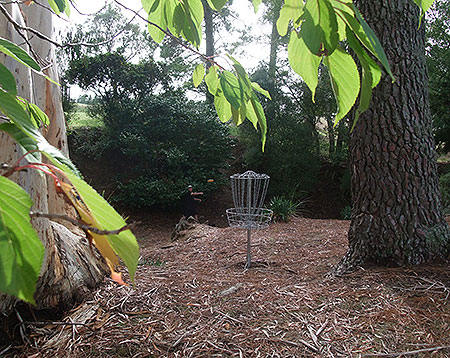 Uphill Run - The 'Lost Tribes' Blair Joines takes a run at the basket on 3. 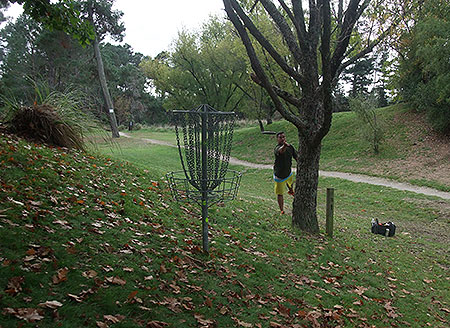 Walk in the Park - SGM Quentin Golder sends a solid putt at the chains on 11. 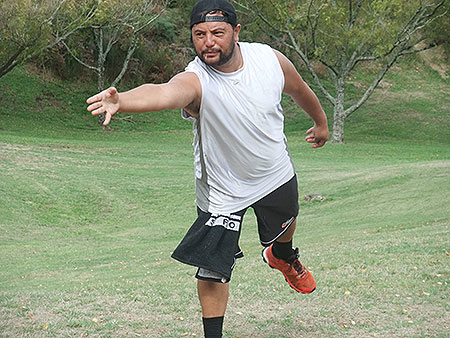 Nice to meet you! -  Jack Moka was lovin the Spa Park course. 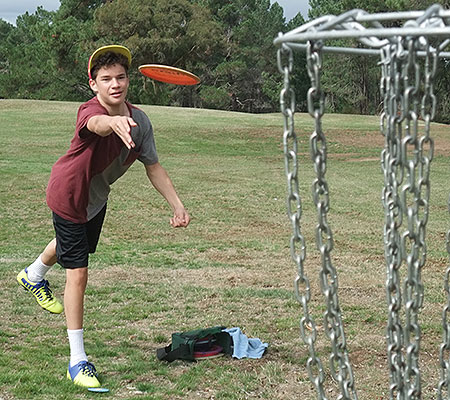 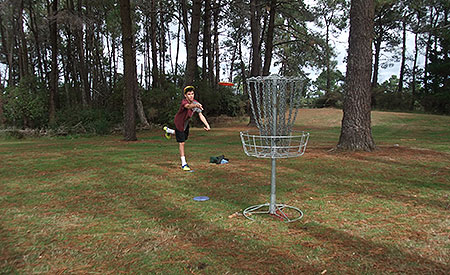 Text Book - He's getting it! Kerian Pere putting down the shadow of the pines on 13. 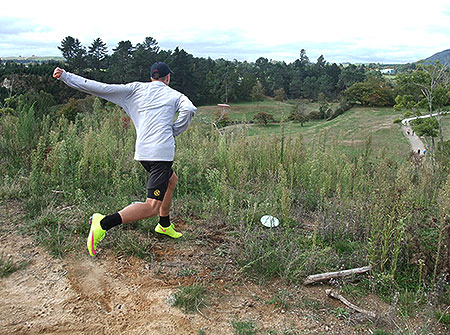 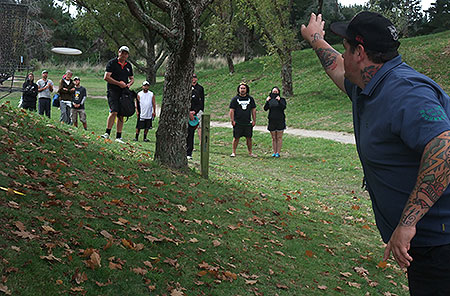 What an Autumn Shot! - Jackson Sullivan putts out the final hole of the 'Super 6' to take 2nd.

Nice Start - Auckland golfer Nick McKay off to an opening par as Shane Sullivan checks out his style.

Marty would be proud! - The GM lines up a turbo.

Worth a Go - Bodene Tutara has a crack at 13 from the flax.

Finishing Strong - Junior Toby Gentil slots his putt on the final 'Super 6' hole to move from 6th to a share of 4th overall.

The Results for 2015 discgolf.co.nz Taupo Classic