The inaugural event on the Waitawa Disc Golf course - the 2015 NZDG Championships - defined this 18 holes as one of the biggest challenges that any player might face so it was always going to be interesting to see who - if anyone - would turn up to another event held at Waitawa. But they did! It seems that the tough windy fairways, body-battering climbs and stunning coastal views actually became a combination that appealed to quite a few Kiwi disc golfer - good on you lot!

It was certainly pleasent to see that the 'coastal 9' had been revamped with the new holes stayed well away from the overgrown boggy areas of the park.

And it was the Coastal 9 that got the competition underway on the Saturday morning with players from as far away as Queenstown and Wanaka joining their North Island compatriots for a 10 o'clock shotgun start.

The general feeling over a excellent well earned lunch was the changes had helped immensely. Althought trepidation remained as the Waitawa Championship 18 was still to come, not once but twice. The afternoon round was to be off the slightly shorter tees and the Sundayround would on the full Championship Course of Waitawa, let's call it The Monster.

As the cards were checked, signed and handed in at the end of Saturday's play a quick look around saw most players with a smile on their faces. For most of the field the memories of last year had been over-ridden with more stories being told of great shots as opposed to great tragedies.

And so it was off to respective beds to rest and contemplate a Sunday off the long championship tees - would it still be all smiles?

And so it was Sunday morning and all but 2 of the initial 29 starters are ready to go. There's a steady breeze across the course which was going to make the ridge shots interesting with many of the fairways featuring OB on either side.

The Championship Tees, as expected, added around 10 shots to Saturday afternoon's scores although there were a few exceptions with Murray Crump bettering his Saturday effort and what an amazing performance by Shelly Flintoft, playing in her first event with discs she'd brought only a week before equalling her Saturday score.

Heading into the 'Super 6' Simon Feasey had a break on the field sitting on a 141, Waiheke Island's Keerti Ji was 7 shots back on 148, Queenstown's Ben Weil-Lake 150, Siep van Vliet also from Waiheke shared 4th with One Tree Hill golfer Brad Muir on 152 with visiting ex-pro American Michael Best rounding out the top 6 on a 153.

The extended 'Super 6' holes were played on the coastal 9 so as to give spectators the best advantage spots - not a lot changed over the six holes as those finishing 7th and down taking up position to watch high quality golf played by the top performers on the day.

Congratulations to everyone who played the inaugural Auckland Coastal Classic. It was another great weekend of Disc Golf and friendship and it was very pleasing to see everyone leave with a smile on their faces,eager keen to come back another time and take on the monster that is Waitawa.

Cuban Revolution - Hole 16 can be so brutal. On the second hole of the round Damo saw a green-landing drive pick up a roll all the way to the bottom fence for a very tough recovery..

Hard Wired - What a difference a millimetre can make - Juan Unda's trusty Eagle was a little bit too slippery on the 6th hole green, resulting in a disappointing OB. 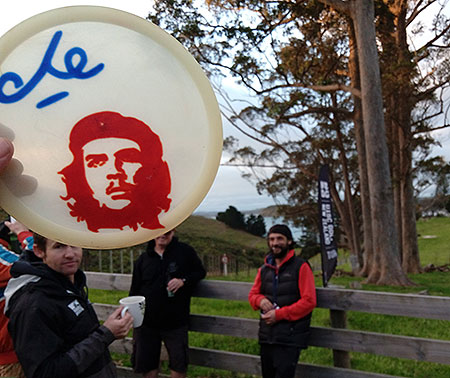 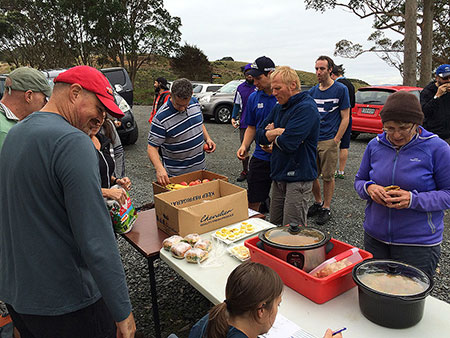 Healthy Feed - Auntie Trudy and her trusty helper Caramia provided players with a wholesome lunch both days, including some wonderful winter soups. 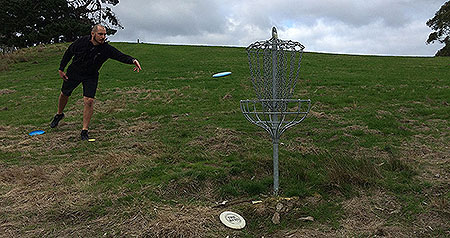 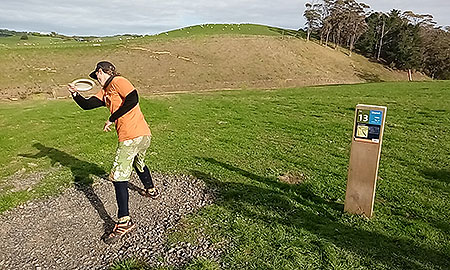 Lycra'd Up - Wanaka Disc Golfer and Team NZ member Kyle Martin winds up on the tee on the blind 13th.

Clenched Buttocks - Another fine put from Mexican golfer Juan Unda, but not without that moment of fear that the disc may bounce out and roll all the %$^#^ way to the bottom. 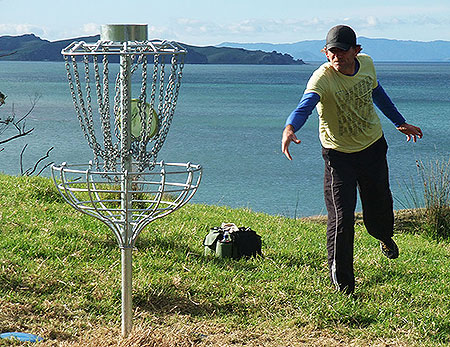 Waiheketawa - With his home island of Waiheke behind him, Seip slots in another fine par. 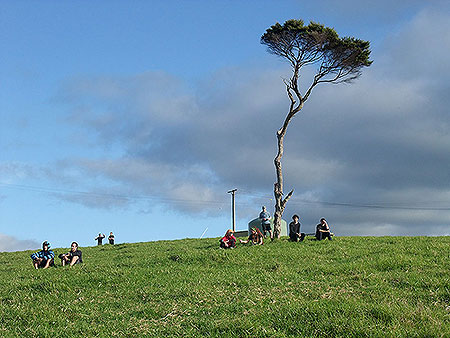 This is Winter? - Players relax and take in the entertainment of the Super Six. 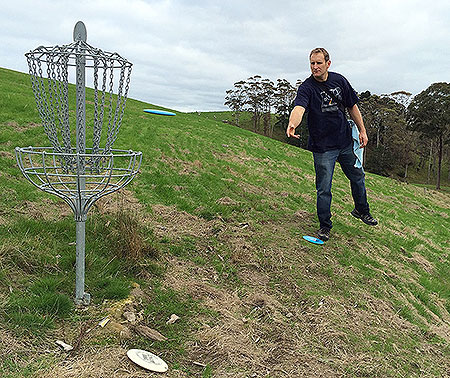 Slope Styles - Looking calmer than the wind that was blowing is Auckland golfer Fred. 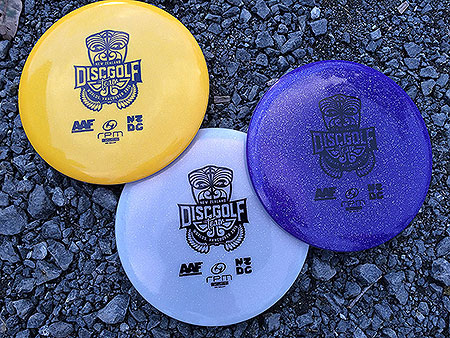 Worlds Team Discs for Sale - We got to see the first of the discs with special labels created for fundraising for our team to the Worlds later in the year - more here. 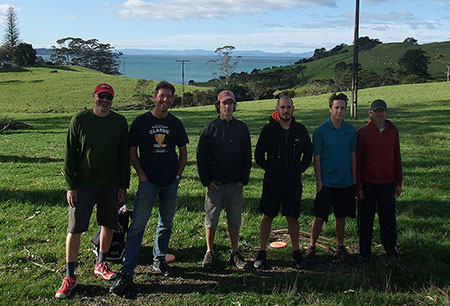 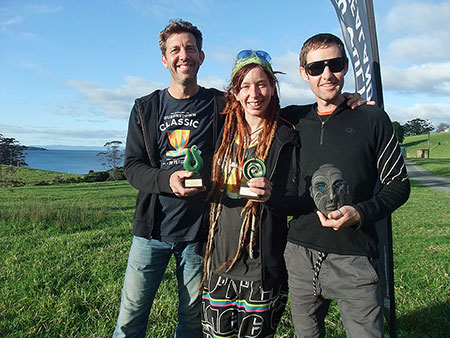 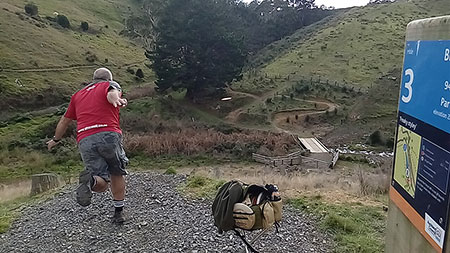 S-Bend - The GM launches his drive off the Championship 2nd, hoping to float above the excellent hand-built switchback built by MTB track creator Tim Hunter. 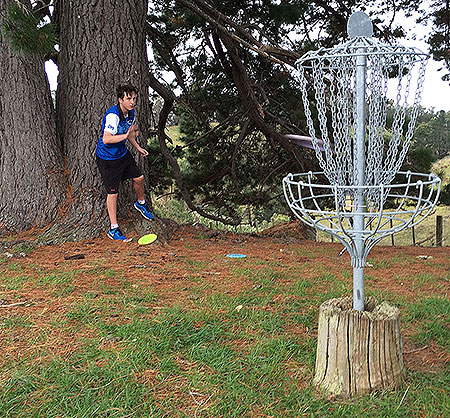 In You Go - Queenstown up and comer Ben Weil-Lake slams his putt into the chains on the unique basket of the eighth hole.

Up and Over - Murray Cramp avoids the distraction of the coastal view as he plays his up-shot on 2.. 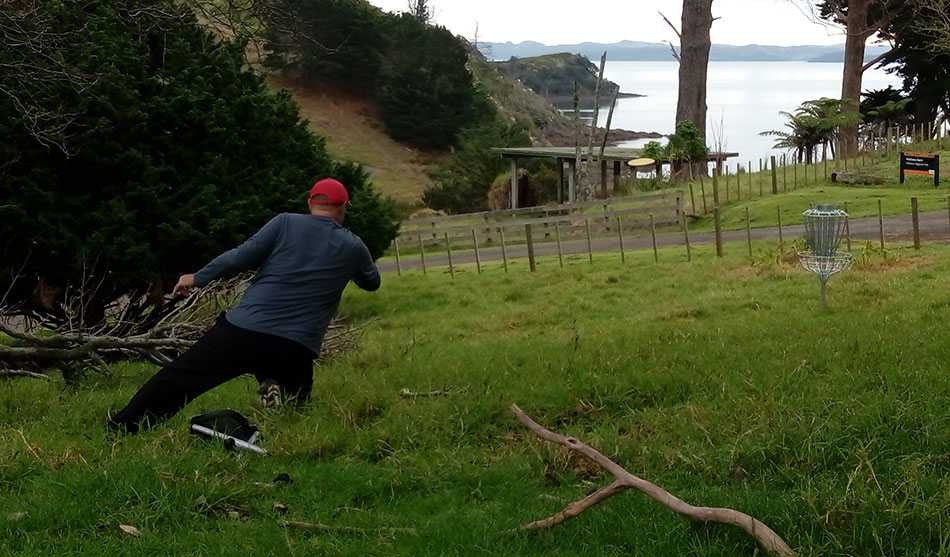 Fell the Kneel - PDGA Pro Michael Best on his way to making the Super 6 .

Revolutionary - West Auckland golfer Damian Peters came out of retirement for the weekend and played some great golf. .

El Che - Damo again, this time putting back towards the tee after an overshoot on the tricky 12th (what are we saying? They're all trickey!).

Fairway Fairies - As Brad spins tales of epic Waitawa golfing adventures to Kyle, The GM shoots his second on the massive first hole assisted by his caddie Bob G..

Spectacular Spectators - They all played an epic 45 holes, but as they didn't make the Super 6, they are now onlookers observing the skills of the top players as they play six holes to determine final placings.. 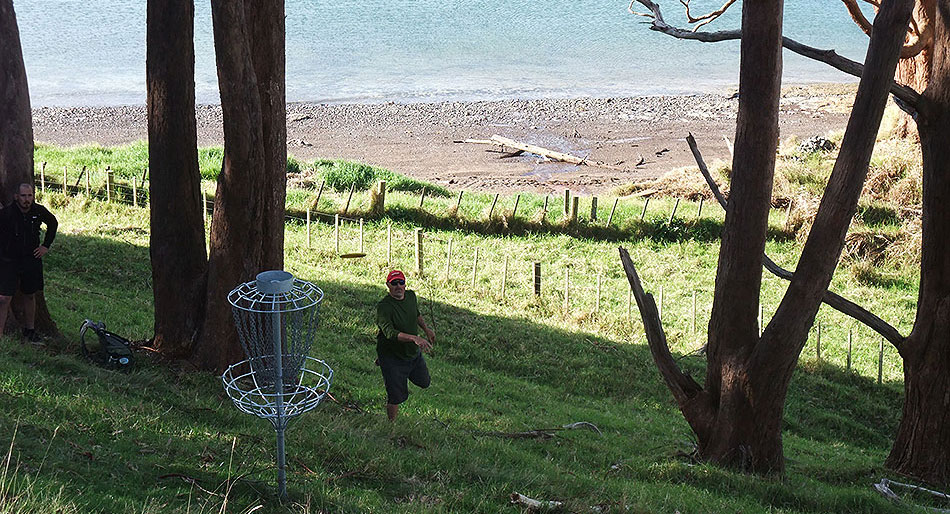 back to topThe Results for The 2016 Coastal Classic of Auckland