The battle to be King of the King

The only thing you can’t organise when putting together any event is the weather, so it’s so nice when the blue sky and sunshine comes to the party as it did over the weekend of the 2012 King Country Classic, this correspondent’s gum-boots and raincoat spent the weekend in the boot.

With the locals playing the Polo Cross course pretty much every day they were under plenty of pressure to perform but a few of the countries top Disc Golfers had come to town to give them a run for their money.

The course was in stunning shape, bone dry and good under foot with bright autumnal coloured leaves floating to the ground dislodged from their summer perch by the occasional light breeze that wafted across the course.

I’m thinking this is a case where the pictures tell the story.

Congratulations to everyone who played and thanks to the locals who as always made us all feel like family for the weekend.

Great Course - Utilising the surrounds of the Taumarunui Polocross Grounds and Manunui Reserve, the course has helped define the style of many top ranked Kiwi players. 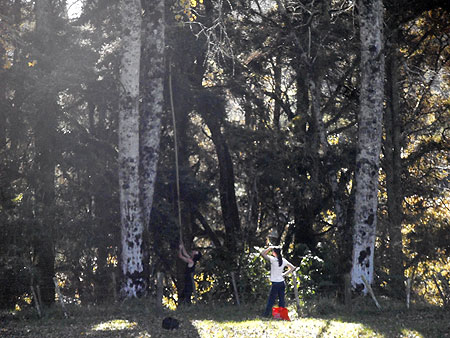 Knight in Shining Singlet - Brave Bruno tries to dislodge a disc for Paula.

Mexican Star Jumps - One of the trickiest greens was the one used twice per round for holes 3 and 9. No trouble for Mexican Juan Unda.

Honest Call - Cameraman Len Skap snapped this shot of GM Bob Gentil (Kauri Point) - having gone OB on his drive on the eight, Gentil made a good honest call as to where his disc left the course, resulting in the need to make a short chip out for 3. It took a spectacular 20 metre putt over fences to keep it down to a double bogie. 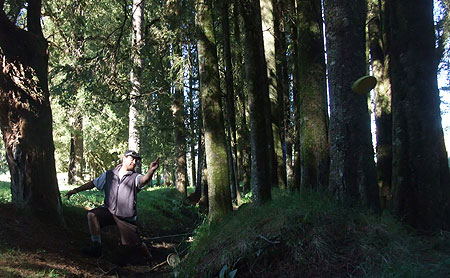 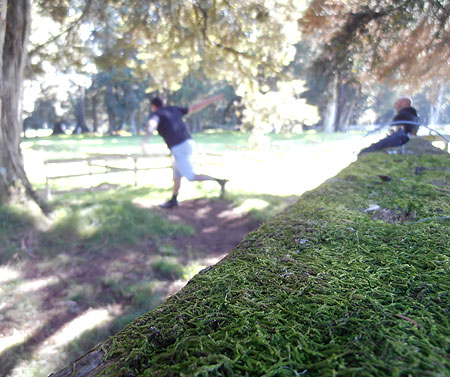 Mossy Maso'e - All sorts of green-ness was around this fabulous course. 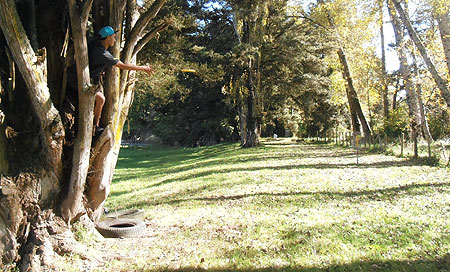 One, Two, Tree Shots - Leading athlete Riki Elston (Levin) turns a spot of bother into a sweet forehand from height on the 7th. 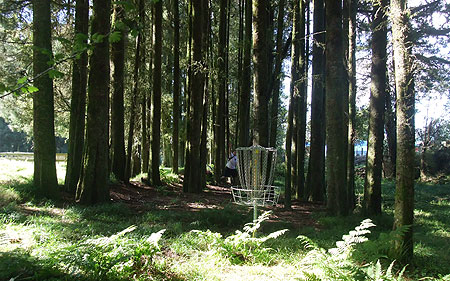 Crazy Maze - One of the day's amazing ways to stay in phase was to blaze you way through the Crazy Maze. 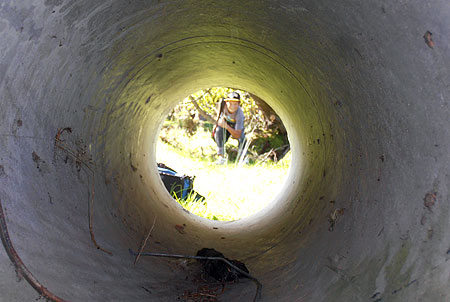 Well Rounded - Like his Manly Sea Eagles counterpart, Keirin Foran (Taumarunui) showed himself to be a well rounded player here in his first ever real game of disc golf - and a good little bloke at that. 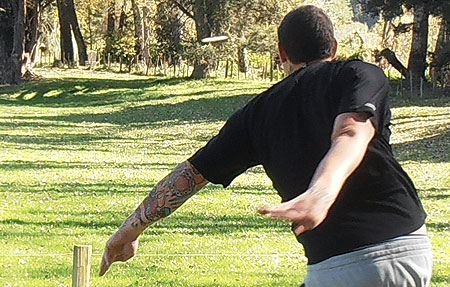 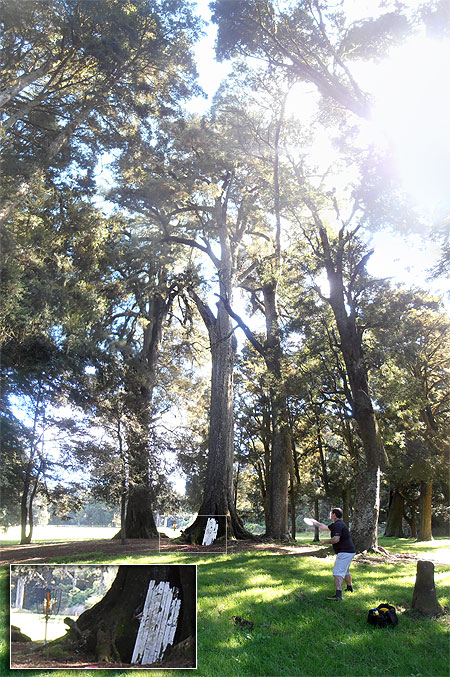 Tall Timber - It's not often that Levin's Jackson Sullivan is dwarfed, but firing through on the 12th Tree Troll hole is one of those times.

Fauna Nation - Everywhere you looked on the Taumarunui Polocrosse Disc Golf Course there was life in the form of many of New Zealand's native fauna.

Jurassic - Gigantic ferns and palms made the fourteenth green seem like a scene from a dinosaur movie. Here regular NZ Tour competitor Jenny Joynt (Tokoroa) lobs in a putt to the chains.

Sparkle - With a style of his own, Aucklander Mike Proctor chips in to the 11th.

One in the Shade - Taking in the background view from the 4th hole, some see a rusty old shed, others see a iconic Kiwi view. Here Hana Robertson (Harcourt Park) completes the hole with a confident putt.

Junior - Only 4 days ago 11 year old Keiran Foran (Taumarunui) was introduced to disc golf. By the end of the weekend he was North Island Junior Champion, showing great improvement over each every round as well as demonstrating the spirit of the game.

The Grand Master is Back - Recovering from a calf injury that took him out in the NZ Nationals (that he still had to run as TD!), Bob 'GM' Gentil (Kauri Point) was back on the Tour. It took a round for the GM to warm up but by Sunday he was back firing those accurate drives and pinpoint putts for a 58 and 57.

Bag Arm Leftie - There has been a lot of talk in the disc golf locker rooms about the rapidly improving form of Auckland golfer Brad Muir and his big left arm. Muir got into the game via Auckland's non-basketed course at Monte Cecilia Park and has been honing his putting skills at the basketed course at the Woodhill Forest Disc Golf Park. Here Brad powers in an approach shot on the long eighteenth 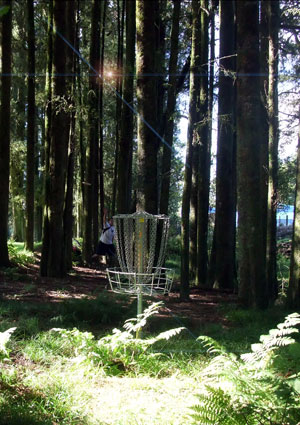 A Maze Ing - The fifteenth hole is a classic. Most golfers know that if they can fire off a straight drive, they have a chance at birdie or easy par. But veer to the right and you toy with OB, veer left and you have a maze of trees to negotiate towards the basket as Jackson Sullivan (Levin) found here in the second round.. 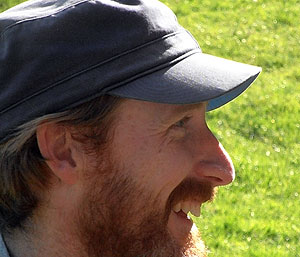 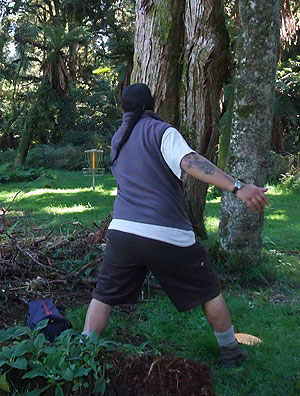 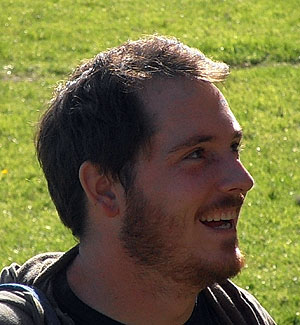 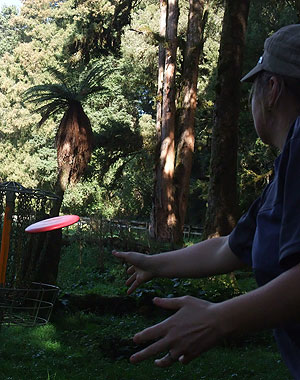 Semi Local - Czech golfer Hana Robertson (Harcourt Park) who lives part of the year right here in Taumarunui has been enjoying living the summer out right on Wellington's only permanent disc golf course at Harcourt Park. Here she completes the spectacular 14th. 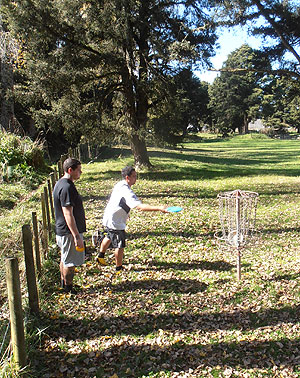 Leaf It Out - Under the falling autumn leaves, the seventh was yet another hole that tempted one with a birdie whilst requiring you to toy with an OB that is only a couple of metres from the basket and fairway. There were a total of 16 OB's scored on this hole.

Winners - We were all winners on the day.

"Well, Herbert at last they've gone - such amateurs!"
"Yeah I hear ya there Ed, don't those idiots know that a 170g Raptor is the best option for these conditions? Sheesh!"