The Outside Sports South Island Championships 2013 powered by Discraft.

The 2013 South Island Championships graced the illustrious hills and scenic backdrop of Wanaka for the second time in as many years.

With such hospitable hosts as Martin Galley and Hazen Simson at the helm, it was sure to be a well delivered event, and one that many would enjoy. The weather, as it has done for 99% of the tour turned up to play its part and the players were presented with near perfect conditions to start the tournament.

Unlike most tournaments we had the pleasant opportunity to play in the doubles tournament on the Friday, which would determine the South Island Doubles Champions for 2013. Through the transfer market window, local party start Chris Davies had managed to snap up the 2013 New Zealand Tour Champion Simon Feasey, while the talk of the town was about last weeks Wanakafest Doubles Champions (Hemi Te Awhitu and Chris Dickson) who sadly were not renewing their formidable paring due to work commitments.

The beauty of doubles enables some amazing shots to be thrown and after the first round it was the relentless sight of Simon Feasey and Chris Davies holding the lead from Russell King  & Thabit Ayoub after a stunning on-compulsory ace from King on hole 14. Not to be outdone, the North Island, being represented by the pairing of Blair Joines & Mike “The Doctor” Proctor, were close behind in third with some sublime golf of their own. Finally Dom Hayden & Waz from Amigos represented the local pride and made up the remainder of the top four groups after the first round.

The second round saw the wind increase along with the scores for the most part. However the question remained… could the pairing of Simon and Chris be reined in? The answer, no. Handing them the 2013 South island Doubles champions’ title and the rest of the field rueing missed opportunities.

For the fanatical disc golfers the fun of the doubles was all about practice for the singles as well as a chance to get to know the course and how it plays. It was another perfect morning on the Saturday. With a few tired eyes turning up to the course and a lot of chains being hit for practice, TD Martin, who had done an amazing job of the presentation and set up for the event, called the players in to run over the rules and regulations.

The first round saw the majority of the field sprint out of the gate with South Island dominance being ever present in the top half of the field. Holding up the challenge from the North Island crew was Blair Joines carding a weekend best of 42 and holding Simon Feasey at arms length on a 43, while Hemi Te Awhitu carded an impressive 44 along with local Dom Hayden one further back making up the top group for the afternoon. Lunch time came at the wrong time for Tournament leader Blair Joines  as he caught an afternoon case of chain jitters carding a sluggish 52 by his high standards.

The Sunday morning saw Blair joined by Chris Dickson after a true professional disc golfing performance in the afternoon round for the top group on Sunday.  The pressure of top group golf got to some of the local South Island crew as both Hemi & Chris were not able to replicate the form that saw them in the strong overnight positions, thus forcing Chris from making his debut in the super 6 and forcing Hemi to play catch up once more. The chasing pack were not giving up hope of a minor miracle though, with TD Martin Galley shooting an excellent 46 on the sunday morning to secure him a Super 6 birth of his own. Another local to join him was co-tournament director Hazen Simson whose weekend long duel with Russell King would be extended for another 6 holes as this was the make up of the Super six with tour newcomer Dom Hayden just missing out on the Super 6 by the skin of his teeth.

Anybody in the disc golfing community will tell you that a 7 shot lead heading into the super six is hard to loose, even more so when the leader is national tour champion Simon Feasey.  For the other five players it was a tight tussle with players carding bogies and double bogies while others were able to produce two shot swings to make last ditch surges for vital tour points. Hemi was able to reduce the gap to one stroke on Blair after the first hole as Blair carded a dreaded double bogie. Strong play from both Martin and Hazen put some daylight between them and Russel. Stylish putting from the Queenstowner saw him pull back some shots of his own.  At the other end of it all, Simon put on a master class for the 30 + gallery that followed while a lot of excitement was had watching the other 5 players jostling for their final positions with every player carding birdies and also the odd bogy too. After more ebbs and flows than a windy Wanaka day it came to be that there was no catching Simon Feasey who took out the open and overall division followed by Blair Joines taking out the Masters title from local and TD Martin Galley, with Lisa Te Awhitu securing the Womans title wrestling it off Wanaka favourite Jes Guy ….for the next 12 months at least!

It was an outstanding tournament that continues to raise the standard of disc golf in this country and we look forward to next year's instalment of the best disc golf views in the entire world in this reporters eyes (not to mention one of the best tournaments on the tour). The Tournament Directors did an amazing job and all the help that went into this event makes it one of the must attends of the National tour for 2014.

back to top
Check out pics from past Wanaka events: 2012 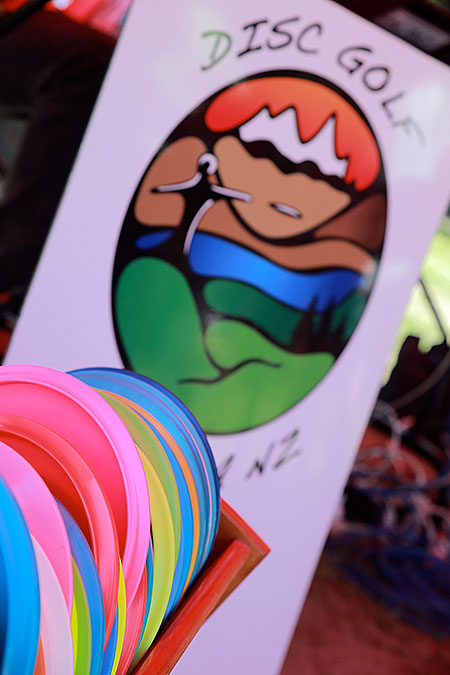 Colourful Lineup - Some of the prizes up for grabs. 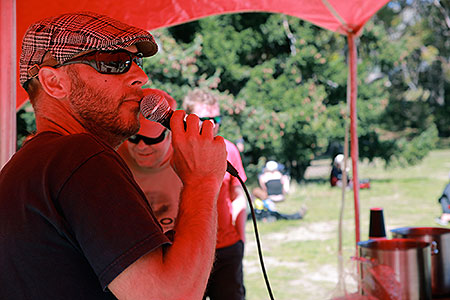 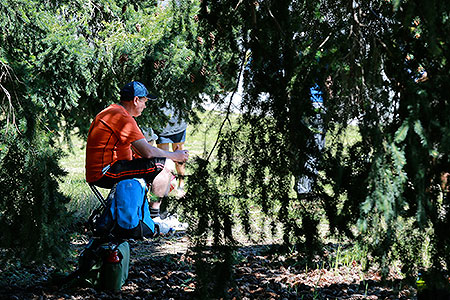 Shady Character - Catching a respite from the spring sun and on his way to yet another title was Blair Joines (Taumarunui). 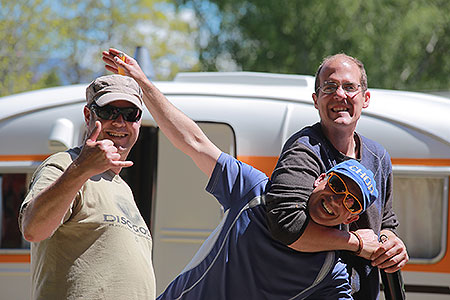 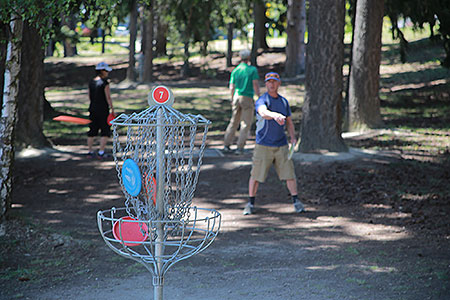 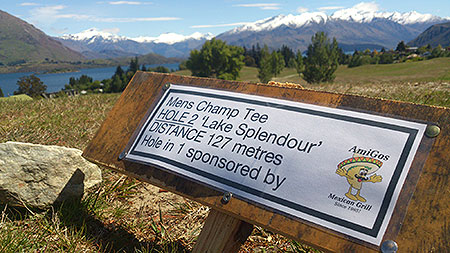 The Name Says it All. 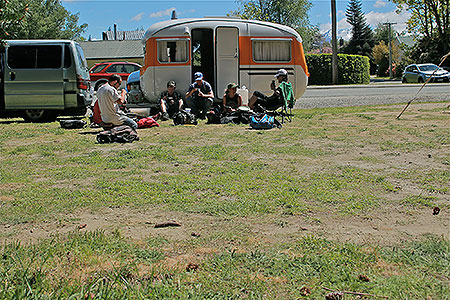 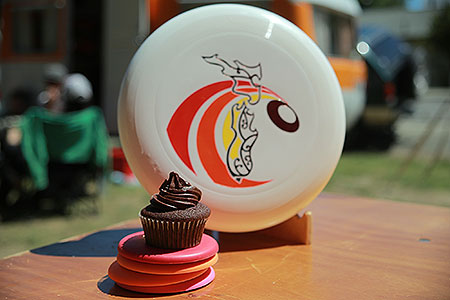 Sweet As Bro - Another great Kiwi tournament disc design put the icing on an awesome weekend. 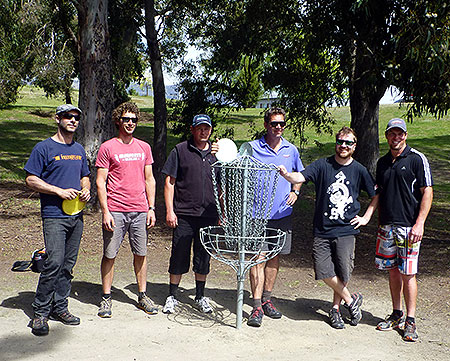 Super Six - With a worthy Southern edge too. 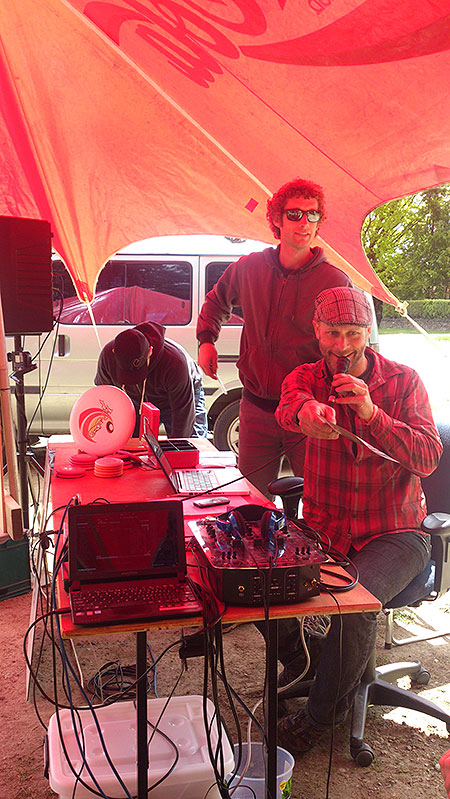 "I Did It My Way...thank you, you're beautiful" - Wanaka's 3rd favourite Sinatra impersonator Martin Galley dedicates his 16th and final song to one lucky player (there was only one left by this stage - ed.). 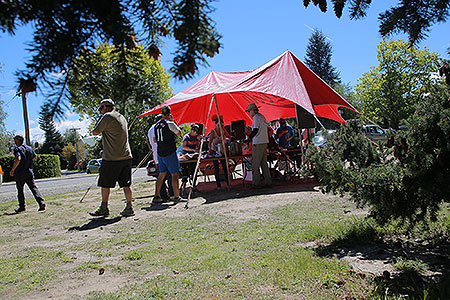 Disc Golf Headquarters - The only weather the HQ tent was protecting us from was the warm southern spring sun. 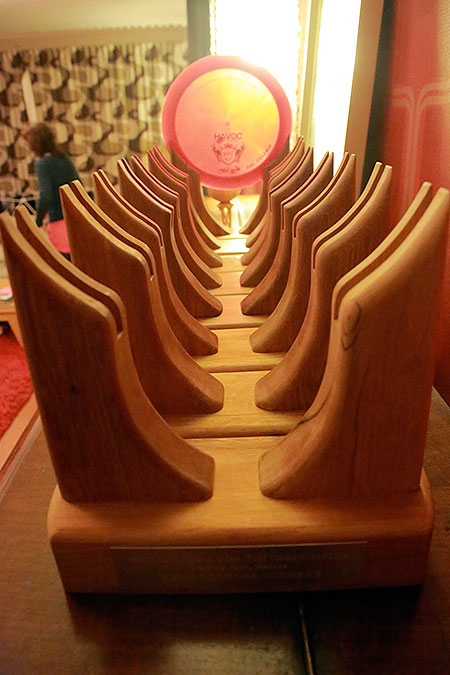 Wooden Parade - The beautiful trophies awaiting the addition of some beautiful plastic. 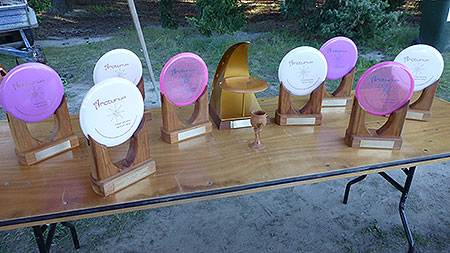 Motivation - Many players were motivated into playing their best when they saw the wicked trophies that could take focus on the mantlepice should they perform.

Disc Golf Chicks (and bloke) - Alice Stip, Sonia George, Aleisha, Robyn Agnew. And of course Charlie just had to be in the shot. 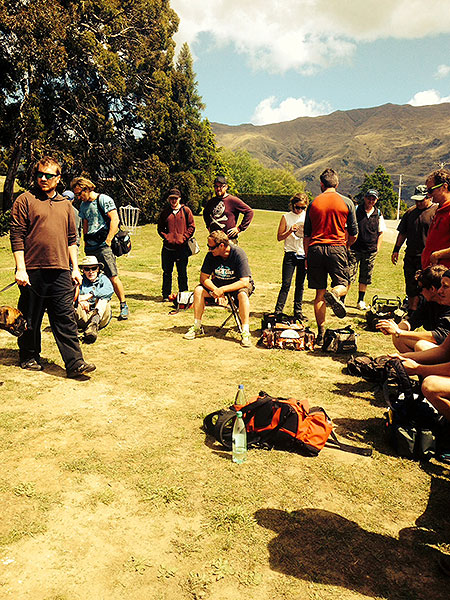 Cap, Shirt, Bata Bullets, Discs - As groups are called out, nerves were building as player prepared to head out to their respective tees. Would The Fease trip up? Or would he seal the National Title before the final round of the year in Auckland? 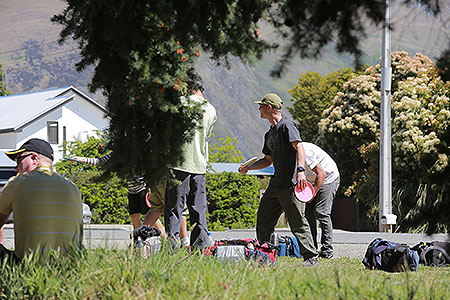 Chosing Arrows for the Quiver - Hunter Harrill considers which disc to use for his round during warm up. 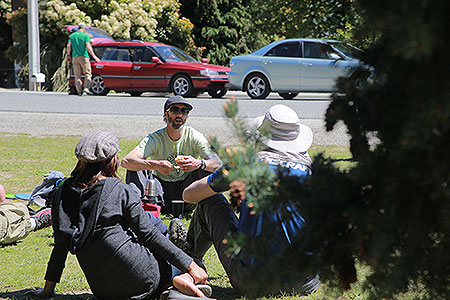 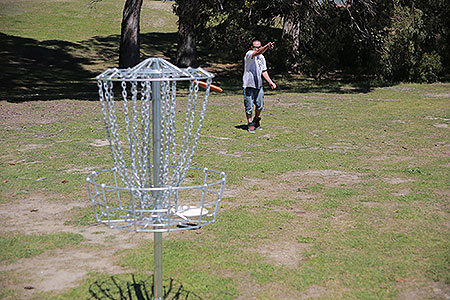 Aiming for the Silverware - Monki getting in some putting practice (was that the hooter that just went?). 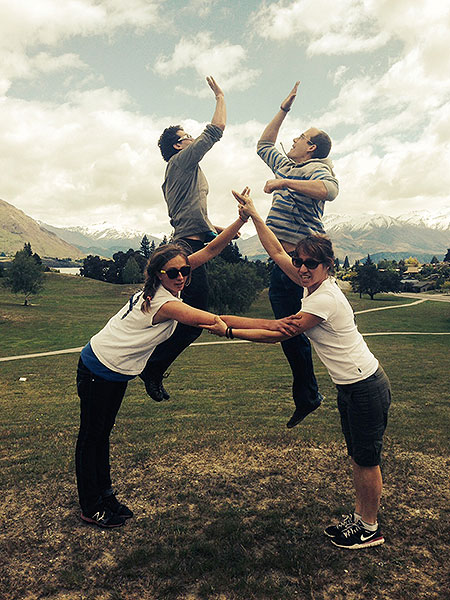 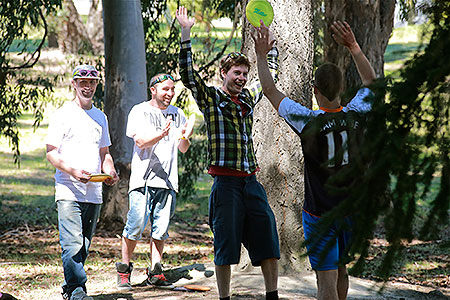 A Right Akass Kicking - Most disc golfers could guess what happened here. Yes, Tom Akass - a local Wanakite - scores an Ace on the 12th. 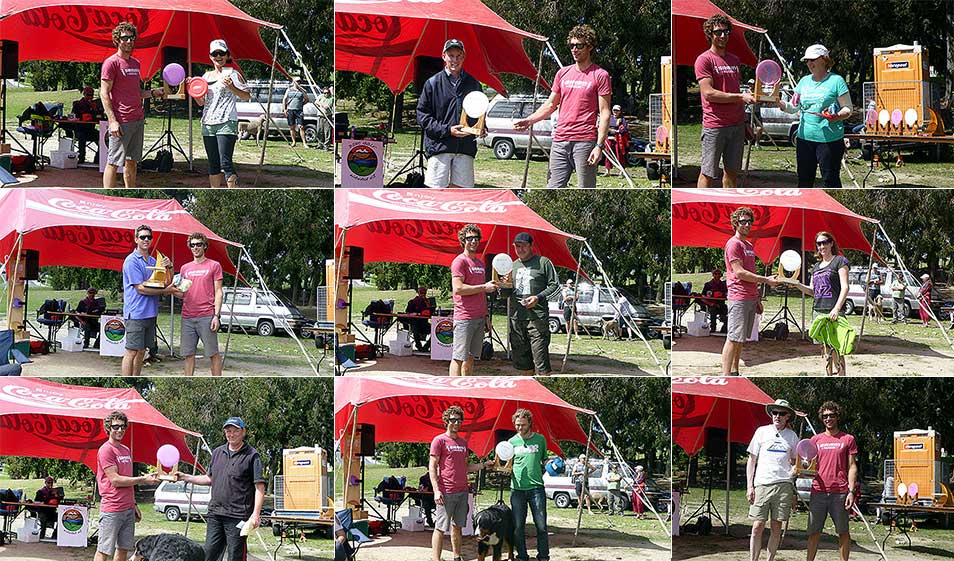