Welcome to the City of Rivers,

The city of Gisborne (population 34,000) is located at the north end of Poverty Bay.

The city maintains a rural charm and is a popular holiday spot. Local industries include agriculture, horticulture, farming and forestry. Wine production is also valuable to the local economy.

It is sometimes known as the City of Rivers as the centre of the city is the convergence of three different rivers, one of which is the shortest river in the country at 1200m long.

Gisborne boasts being the first city in the world to greet the sun each day. Technically, however, this is only true for part of the year. Both Suva, Fiji, and Nukuʻalofa, Tonga, are closer to the International Date Line and therefore would seem more likely candidates for this title. Due to the Earth's tilt on its axis, however, Gisborne does overtake their claim as New Zealand summer days grow longer. In the longest days of summer, though, it again loses the title to the hillier suburbs of Dunedin in the South Island.

The city has the benefit of being very close to the white sand beaches of Waikanae and Midway. A short distance from the city is the surf beach of Wainui.

Just before Christmas 2009 Sport Gisborne and the Gisborne District Council opened a course in Alfred Cox Park in Gisborne.

It started with 6 permanent baskets, by the end of summer it was increased to 9, then thanks to the late Bob Clark it became a 100% marked out 18 basket Disc Golf course. It's a great little course that requires a tad of power but a lot more finesse play.  It's just one block back from the beach, right behind the information centre on your way into town on Grey Street.

This is a course we now visit annually on the NZDG Tour. Check the Events page for details. 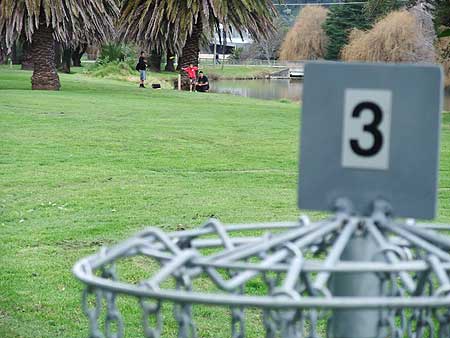 Well done Gissie! - The course is well laid out with most holes shooting away from the water and boundaries. Here local Taran Harrison sends one down #3 watched by Dad Rangi and playing partner Jackson Sullivan from Levin. 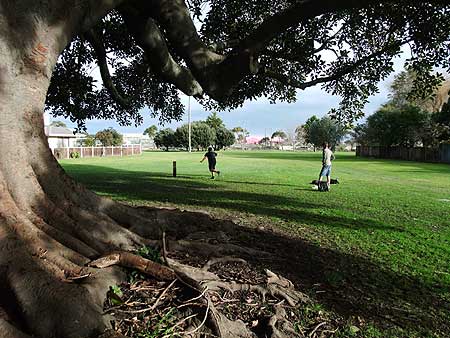 Take Five - Tokoroa tour player Jenny Joynt slams her put into the chains on hole 5, to the enjoyment of playing partner Blair Joines. 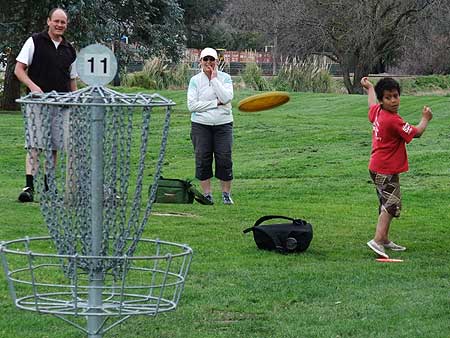 Another buck for the cause - eventual winner Blair Joines and GM Jenny Joynt muse at the fact that since Dad offered $1 per par young Taran Harrison slotted them from everywhere.

The 18 Disc Golfers who made up the field for the Inaugural Gisborne First Light Bob Clark Memorial in front of the Alfred Cox Park Course sign. 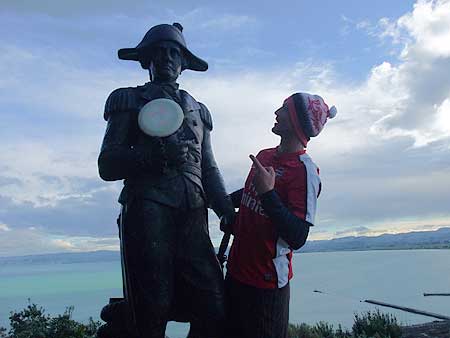 The Original Grand Master - Maybe our sport has been around longer than we think! Auckland tour player Damo checks out what is considered by many to be the very disc Young Nick threw ashore from the crows-nest to tie this country to the British Empire. Now held proudly by his captain.

They have seen the light in Gisborne. 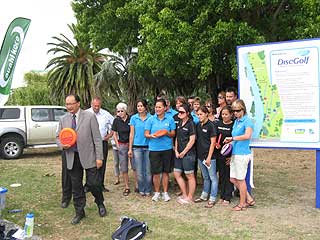 Just before Christmas 2009 we opened a course in Alfred Cox Park in Gisborne.

It started with 6 permanent baskets and that has just been increased to 9 thanks to a local enthusiast, but an 18 hole course has been designed and as more people play more baskets will be installed.

The course is just 1 block back from the beach right behind the information centre on your way into town on Grey Street. We can't wait for the full 18 baskets to be installed as it would be great to visit this spot annually on the NZDG Tour. 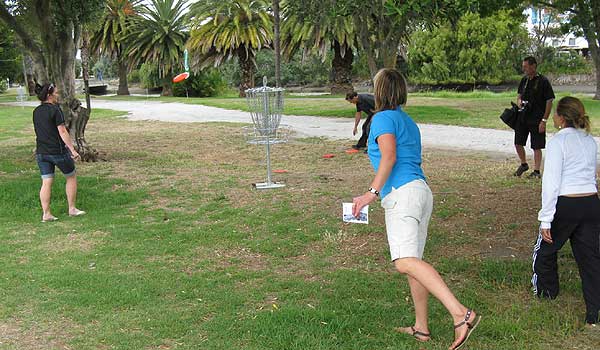 Click locations on the map of New Zealand for information on disc golf in that area. Here's the direct link to this map in Google Maps.

www.discgolf.co.nz is proud to stock the now world-acclaimed RPM Discs range of flying discs and baskets, everything from Frisbee-type throw-catch discs to golf specific discs along with permanent and portable Disc Catcher baskets/targets.